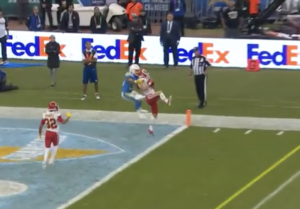 Daniel Sorensen intercepted Philip Rivers in the final minute as the Chiefs held off the Chargers 24-17 in Mexico City. Kansas City’s defense racked up four interceptions in all. Patrick Mahomes passed for 182 yards, a touchdown and an interception for KC. LeSean McCoy and Darrel Williams rushed for scores as the Chiefs improved to 7-and-4. Rivers passed for 353 yards and a touchdown for the Chargers, but his four picks made the difference. Keenan Allen caught a touchdown and Michael Badgley nailed three field goals as the Bolts fell to 4-and-7.

The Chiefs head into their bye week with a half-game lead over Oakland and return home to Kansas City on December 1st for a home game with the Raiders. I would assume Oakland can beat the Jets this week, so both teams should be 7-4 going into that showdown at Arrowhead. A win for the Chiefs then would not only give them a one-game lead in the AFC West with four games to play, but they would hold the tie-breaker over the Raiders.