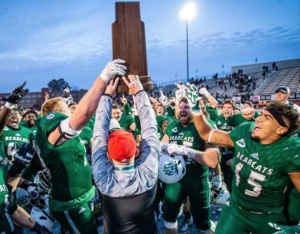 The Northwest Missouri State University football team captured a share of its 30th MIAA regular season title by taking down previously undefeated University of Central Missouri, 45-23. While their dreams of an undefeated season ended for the Mules, they also claim a share in the MIAA regular season title, their first since 2003. Both Missouri powerhouses finish at 10-1 and now turn their focus to the Division II playoffs as they await Super Regional pairings.

The Northwest defense set the tone with Northwest eight quarterback sacks, forced six turnovers and blocked a kick. On the first play of the game, Trey Washington came up with an interception on an underthrown ball by the Mules quarterback Brook Bolles. The Bearcats were able to control the game on the ground, rushing for 236 yards and four touchdowns. Northwest jumped out to a 14-0 lead and led 28-17 at the half.

Despite the teams combining for 864 yards, the third quarter was scoreless. In the fourth, the Bearcats defense helped put the game out of reach. To start the quarter, the Bearcats turned a Brook Bolles interception into another score as Parker Sampson hit a 45-yard field goal for a 14-point lead, 31-17. One play later, Bolles was picked off again, this one returned 29 yards for a Bearcat touchdown to go up 38-17. The teams traded touchdowns to round out the scoring.

The 2019 NCAA Division II playoff selection show will be shown on NCAA.com on Sunday at 4 p.m.