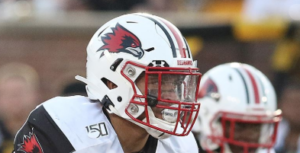 #15 Southeast Missouri (8-3, 6-1) scored 20 second-half points en route to a 26-12 win over Eastern Illinois (1-10, 1-6) Saturday afternoon at O’Brien Field. With the win, SEMO nailed down its second-straight eight-win season marking the first time in program history where the Redhawks won eight games in back-to-back years. The eight-win season is SEMO’s ninth all-time since its football program began in 1904.

The Redhawks trailed, 7-6, at halftime before taking their first lead of the game thanks to a big play on special teams. Shabari Davis returned Stone Galloway’s punt 36 yards for a touchdown to put SEMO ahead, 13-7, with 13:03 remaining in the third quarter. It was the Redhawks first punt return for a touchdown in four years.

SEMO tacked on 13 more points in the fourth quarter to finish off the Panthers.

SEMO wraps up its regular-season at home against rival Murray State on Nov. 23. A win will clinch at least a share of the Ohio Valley Conference title for the Redhawks. If SEMO wins and Austin Peay loses, the Redhawks will win the title outright.