During a hearing Thursday in Washington, D.C., Congressman Jamie Raskin, D-Maryland, said “Big Brother has come to Missouri” and Libertarians have suddenly become “the champions of Big Brother”. St. Louis Congressman Lacy Clay, D-Missouri, who sits on the U.S. House Oversight Committee, put together a panel to testify about “State Efforts to Undermine Access to Reproductive Health Care.”

“I am truly amazed that the Missouri Department of Health went along with efforts to shut down the (St. Louis Planned Parenthood) clinic, intimidate patients and threaten providers, and would allegedly and bizarrely track women’s menstrual periods on spreadsheets to determine if they had had an abortion,” says Clay.

The clinic falls within Clay’s district.

The Missouri Administrative Commission is considering the state’s decision in June to reject the license renewal of the St. Louis Planned Parenthood. In an October press release, Missouri Health and Senior Services Director Randall Williams said he did not order state regulators to create a spreadsheet to track the menstrual cycles of Planned Parenthood patients. Williams said the workers took it upon themselves to make a spreadsheet with legally-obtained information to determine if the St. Louis clinic was accurately reporting any failed abortions.

Williams said the first time he saw the spreadsheet was during his October 17 deposition before the state commission. The statement says a rule that took effect decades ago requires providers to submit abortion reports to the state that include the last normal menstrual cycle of each patient who had an abortion at the clinic.

Gov. Mike Parson said in a statement that, regardless of the number of Planned Parenthood facilities in Missouri, every step should be taken to ensure the protection, safety, and well-being of women’s healthcare. 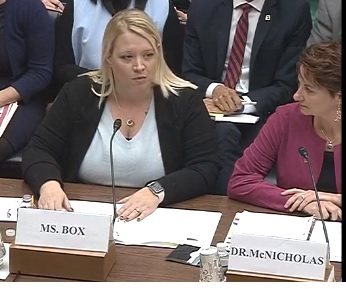 “They came to our clinic five times in the first five months of this year, all while they conceded that hospitals and surgery centers providing much riskier procedures went years without a single inspection,” she says. “During this year’s inspection process, the department also admitted to keeping a spreadsheet of my patients’ menstrual cycles. A brazen abuse of power and misuse of data motivated by an agenda to find something, anything that they could use to justify further scrutiny.”

McNicholas testified that abortions are mischaracterized for political reasons.

“It’s healthcare. So yes, unfortunate outcomes will happen for some people. But by and large, it is safer than a colonoscopy, (removing) wisdom teeth, and I will also say safer than carrying a pregnancy to term,” says McNicholas.

“There are many things we’ve heard that should make us shudder but comparing killing a baby to removing wisdom teeth is absolutely beyond the pale,” she says.

Jennifer Box – a St. Louis mother of three – who terminated her pregnancy after her fetus was to die in delivery or soon after—said politics had no place in her family’s pain.

“Our daughter, if not a stillborn, would be born into a life of immediate and repeated invasive medical intervention. She would essentially have been born onto life support,” said Box. “I never fathomed my governor would weaponize the Health Department in an attempt to end safe, legal abortion in Missouri. I did not anticipate that my state Legislature would enact an eight-week abortion ban – a ban that would have made it impossible for me to make the best decision for my family.”

Republican committee members did not agree, saying any abortion is immoral – and Planned Parenthood is only about abortion. Congresswoman Foxx said doctors cannot predict what happens because they are not God.

Box said the decision she and her husband made was painful.

“With broken hearts, we knew that the greatest act of love that we could undertake as her parents would be to suffer ourselves instead, to end the pregnancy, grant Libby peace and spare her tiny, broken body a short life full of pain,” says Box.

The Missouri Administrative Commission is not expected to issue a ruling on the Planned Parenthood abortion license controversy until at least February. Meanwhile, the clinic is still providing abortion services. It also offers a wide range of other reproductive health care services that the state has said is not part of this particular licensing predicament.

By Ashley Byrd and Alisa Nelson

Previous Post: « Missouri’s second vaping-related death is a woman in her mid-50s
Next Post: Watch out for deer – a popular deer hunting weekend begins Saturday »