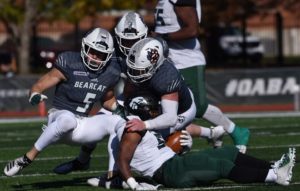 The 79-point win is the largest margin of victory in Northwest’s program history and the 79 points is the second most scored points in Northwest’s history (Northwest scored an 86-13 win over Southwest Baptist on Sept. 29, 2007). It’s the ninth time in school history that Northwest has scored 70 or more points in a game and it’s the eight shutout for the Bearcats under head coach Rich Wright.

Northwest moves to 8-1 on the season, while Northeastern State falls to 0-9 overall. The Bearcats will be on the road next week to take on Fort Hays State in Hays, Kansas. Kick is set for 2 p.m.

Previous Post: « Central Missouri pulls off miracle comeback to improve to 9-0
Next Post: SEMO moves into three-way tie for first »