A key Democratic state senator is pleased that Missouri Senate President Pro Tem Dave Schatz, R-Sullivan, has formed an interim committee to study gun violence, saying she hopes the committee will come up with a blueprint to reduce the violence. 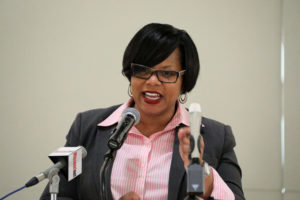 The committee’s first hearing is Monday in Jefferson City.

State Sen. Jamilah Nasheed, D-St. Louis, called on Pro Tem Schatz to create the committee, back in September. Nasheed describes the gun violence in her hometown as an epidemic.

“I mean when we have children dying on the street by way of AK 47’s and AR-15’s, yeah this is a massive, massive crisis,” Nasheed says.

“And I’m just happy that the senators are ready to roll up their sleeves and begin to look at best practices in terms of legislation so that we can help reduce the violence that’s plaguing the inner cities as well as outstate,” says Nasheed.

U.S. Attorney Tim Garrison has noted that St. Louis, Kansas City and Springfield are three of the top 15 most violent cities in the nation, on a per capita basis.

At least 13 children have been killed in St. Louis city shootings in 2019, and Kansas City Police say there have been 122 homicides there this year. In central Missouri’s Columbia, there were five murders during the month of September.

The Senate Interim Committee on Public Safety is chaired by State Sen. Doug Libla, R-Poplar Bluff, and State Sen. Jeanie Riddle, R-Mokane, is the vice-chair. Republicans have a 4-3 majority on the committee, which Nasheed serves on.

Senator Nasheed tells Missourinet the committee’s first hearing is Monday morning at 10 at the Missouri Capitol, where they’ll hear from expert witnesses in areas like public safety and social work.

She has also called for increased protection for crime witnesses, saying they are fearful for their safety. Governor Mike Parson (R) has also expressed that concern.

Click here to listen to the full interview between Missourinet’s Brian Hauswirth and State Sen. Jamilah Nasheed, D-St. Louis, which was recorded on October 30, 2019: