(NASCAR)—Martin Truex Jr., dominated the Martinsville “paper clip” track as no driver ever has but had to hold off William Byron to nail down the first of four slots in the championship runoff in three weeks. The win is his seventh of the year, tops among Cup competitors.

Truex led 464 of the 500 laps on the long, thin one-mile oval and held off competitors on three restarts in the last fifty laps to beat Byron by almost four-tenths of a second. No driver has led as many laps at Martinsville in the 99 previous races there. His run marked the most dominating performance at any track since Kyle Petty led 484 of 500 laps at Rockingham in 1992.

Dominating drives are not new to Truex who set a record in 2016 by leading 392 of 400 laps in a 600-mile race at Charlotte. No driver has ever led more than the 588 miles he led that day in that race.

Byron is no longer in the hunt for a championship slot. Nor is Brad Keselowski, who finished third. Pole Winner Denny Hamlin finished fourth and leads the points standings for one of the three remaining positions in the championship finals. Ryan Blaney, who ran as high as second at times, finished fifth but is now fifteen points below the cut line for the finals. Kurt Busch, who was fifth, is not eligible to be one of the final four. Former champion Kevin Harvick finished sixth and goes to next week’s race at Texas fourteen points below the line. Defending champion Joey Logano finished eighth but is fourth in points. Kyle Larson, driving with a broken rib suffered two races ago at Talladega, was ninth in the race and is seventh in points, 24 below the cutoff point. Kyle Busch is third in the points although he finished fourteenth in the race in a damaged car. Chase Elliott, who qualified second but started at the back after an engine change, worked his way into the top five until his car appeared to have broken an axle. He got back on the track after repairs but finished 36th and must win one of the next two races to advance to the championship race in Miami. 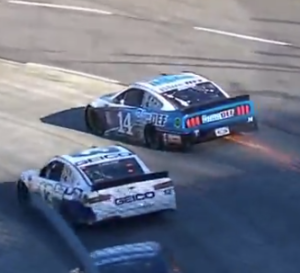 Clint Bowyer, who won the spring race at Martinsville last year and had the best average finish in the last four races, started seventh and was running second when he thought he had a left rear tire going flat. His pit crew changed both left side tires but it was the right-rear tire that was flat. Bowyer spun and returned to the pits, coming out 29th. He eventually left the race with a track bar problem and finished 35th.

(FORMULA 1)—The Grand Prix of the United States next weekend is the likely place Lewis Hamilton will be crowned Formula 1 champion for the sixth time. Hamilton’s win in the Grand Prix of Mexico could have brought him the title there if teammate Valtteri Bottas had failed to reach the podium. But Bottas came home third behind Ferrari’s Sebastian Vettel.

The Grand Prix of the United States will be run at the Circuit of the Americas near Austin, Texas, the 19th race in the 21-race F1 season. Hamilton’s championship would leave him one behind Michael Schumacher, whose seven titles included five in a row, 2000-2004.

Hamilton replaced Schumacher at Mercedes when Shumacher retired after the 2012 season.

(INDYCAR)—IndyCar’s final test of the Aeroscreen cockpit safety device is set for November 5 at Sebring. The course will simulate a street course. James Hinchcliffe and Sebastian Bourdais ill do the testing adding data and driver reactions that could tweak the design. Scott Dixon and IndyCar champion Josef Newgarden tested October 15 at Richmond’s .75-mile oval to see how the device works on a small track. The first test by Dixon and Will Power at Indianapolis was to see how it would work on a superspeedway.

Previous Post: « A pair of Redhawks shine in victory over UT Martin
Next Post: Chiefs come up just short against Rodgers, Packers »