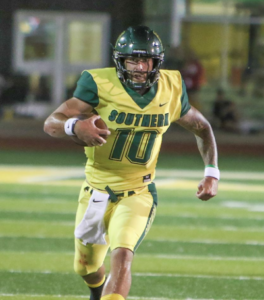 The Missouri Southern football team tied or broke six single-game records, while Charles West broke a single-season mark as the Lions won at Northeastern State 86-7 on Saturday in Tahlequah, OK.

The Lions (2-6, 2-6 MIAA) broke the MSSU single-game marks for total offense (743), points (86), margin of victory (79), and first downs (42), while Jacob Park broke a record for touchdowns responsible for with eight (five passing and three rushing) and tied a single-game touchdown pass record with five.

The Lions also broke an MIAA single-game first-down record with 42, breaking the previous record of 41, held by Southwest Baptist against Truman State in 2007.  Charles West caught six passes and has 36 catches on the season, setting a new MSSU single-season record for receptions by a running back.

Previous Post: « Northwest Missouri hangs with Duke in exhibition game
Next Post: A pair of Redhawks shine in victory over UT Martin »