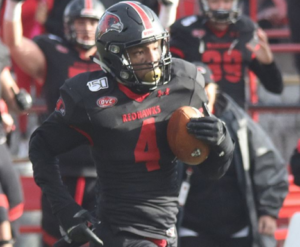 For the second week in a row, Southeast Missouri won two Ohio Valley Conference football honors. Outside linebacker Omardrick Douglas was named OVC Defensive Player of the Week and quarterback Joe Pyle was voted OVC Newcomer of the Week.

Douglas returned an interception 32 yards for the game-winning touchdown with 5:32 left in the fourth quarter to give #24 Southeast Missouri a 17-10 victory over UT Martin. Douglas picked off John Bachus, sprinted down the near sideline and finished off his game-changing play by diving into the end zone. He also had three tackles and blocked a field goal. Douglas helped lead a SEMO defense that forced a season-high five turnovers, had three interceptions and recorded five sacks. The Redhawks shutout the Skyhawks in the second half, as well.

Pyle scored the game-tying touchdown against UT Martin early in the second half. On the fourth play of the third quarter, Pyle busted loose for a 61-yard touchdown run to bring the game to a 10-10 deadlock just 1:22 into the second half. He played the entire second half after a coach’s decision pulled starter Daniel Santacaterina from the game. Pyle threw for 51 yards and added 35 net rushing yards in his performance.