You are here: Home / Sports / Missouri State men’s soccer moving up the national rankings and looks for a program record this weekend 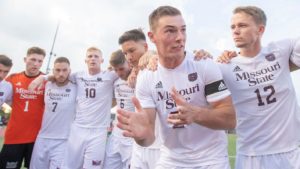 Missouri State jumped five spots to No. 9 in the latest United Soccer Coaches Top-25 Poll, announced on Tuesday (Oct. 22). They became the fourth team in program history to receive a top-10 ranking in the national poll, joining the 1999, 2000, and 2005 teams.  The No. 9 ranking marks the highest spot for the Bears since the 2005 team peaked at No. 9 during an eight-week stretch inside the top-25. MSU’s highest ranking came in the 2000 season with a No. 3 spot in the Sept. 11 poll.