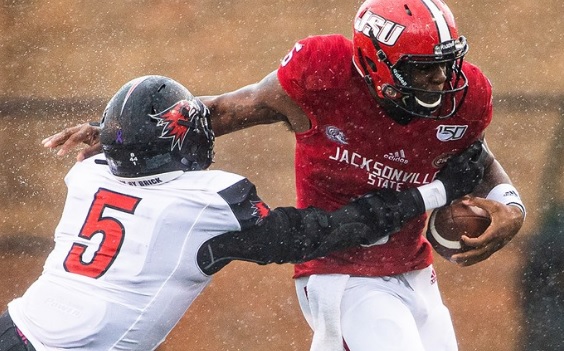 Southeast Missouri (4-3, 2-1) had a season-high four takeaways and scored 14 fourth-quarter points to stun #14 Jacksonville State (5-3, 2-2), 24-21, Saturday on a rainy day at Burgess-Snow Field. SEMO beat JSU in Jacksonville for the first time in its NCAA Division I history. The Redhawks defeated the Gamecocks in back-to-back seasons for the first time since 1963 and 1964. And, with the win, the Redhawk seniors became the all-time winningest senior class in program history.

“A win like this means everything for our program as the seniors have left their legacy becoming the winningest class in program history,” said SEMO head coach Tom Matukewicz. “Defensively, that was as good of performance as I’ve ever been around.”

SEMO’s senior class recorded their 19th win since the 2016 campaign and surpassed the 2010 class’ total of 18 victories. The Redhawks gave Matukewicz his program-best sixth win over a ranked opponent.