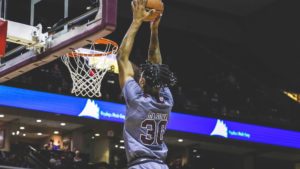 Missouri State is the overwhelming preseason favorite to win the Missouri Valley Conference, according to the league’s preseason men’s basketball poll of head coaches, media and communications personnel announced Thursday.

Coach Dana Ford’s Bears earned 29 of a possible 44 first-place votes and 410 points in the poll overall to earn the top spot. With five first-place votes and 368 points, Bradley was picked second, just ahead of Northern Iowa (343), Loyola (340) and Drake (243) to round out the top five spots. UNI’s vote total included three No. 1 votes, while Loyola snagged six top tallies.

“We are honored to be viewed in this light in the preseason poll,” said Ford. “However, the most important thing is where we finish the season. We have a lot of respect for the rest of the league, and we know whoever comes out on top at the end of the year will have earned it.” 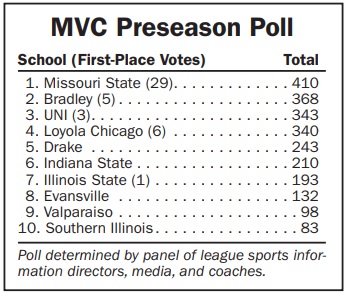 Over the last 25 years, the MVC’s preseason favorite has gone on to play in the NCAA Tournament 16 times and the NIT five times. In that span, the team sitting atop the preseason poll has won the league regular-season title 13 times