[NASCAR]—Clint Bowyer needs to pull himself up by his bootstraps in next week’s NASCAR Cup race at the Kansas Speedway to make the round of eight drivers competing for the 2019 championship. Bowyer dodged several multi-car wrecks at Talladega only to see his good day evaporate when cut a tire and spun down to the track apron. 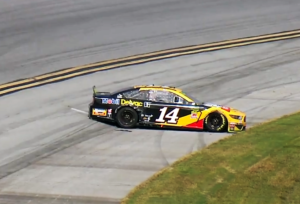 The front wheels of his car were on the apron but the rear of his car remained on the steep banking of the track, leaving his rear wheels off the ground. By the time the safety crew pushed him off the banking so he could drive to pit road, he was two laps down. He had been running a solid race while several other championship-round contenders were getting tangled in big crashes and had won the second stage—his first stage win of the year—worth ten bonus points. But at the end of the race he was 23rd and heads to next weekend’s race eleventh in the point standings, six points out of eighth.

It’s similar to the position he was in when the field was cut from sixteen to twelve but a fifth-place finish boosted him into the round of twelve.

The Kansas Speedway is as much a home track as any for Bowyer. He’s from Emporia, about 100 miles southwest of the track. He finished fifth in the Spring race there. We’ve adopted him as a Missourian because he has a place at the Lake of the Ozarks.

The race was stopped with five laps left after the final big pileup that involved eleven cars, and went green with two laps to go. Ryan Blaney crossed the finish line .007 seconds ahead of Ryan Newman. The victory automatically moves Blaney into the round of eight.