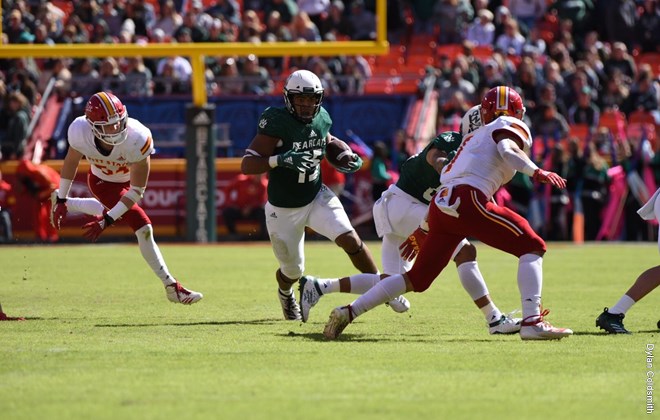 Arrowhead Stadium played host to the battle of the unbeatens and the No. 7 Northwest Missouri State Bearcats tricked and treated No. 13 Pittsburg State Gorillas to a 38-17 Bearcat victory.

The Bearcats (6-0 overall) started the game in a less than favorable position as they played into the Gorillas (5-1 overall) game plan with back to back three and outs. Pittsburg State didn’t squander the opportunity to get up quickly on its rival as quarterback Brandon Mlekus hit his wide receiver Lorenzo West in stride for a 78-yard touchdown at 10:14 in the first.

Braden Wright and company responded quickly as he used his feet to put them in prime position to strike after a 48-yard run set them up with first and goal at the six. Northwest completed the four-play drive with a shovel pass to Marqus Andrews at 8:33 to tie the game at 7-7. This touchdown created the foundation for Andrews’s career day as a receiving target.

Momentum was on the Bearcat sideline as they headed toward 28 straight points. The streak of scoring was helped by the Bearcats focus on executing trick plays and using their two-quarterback system as an advantage.

Northwest began the run with another first-quarter touchdown. Backup quarterback Mike Hohensee found Andrews for another touchdown with a back-shoulder catch in the corner of the end zone with 5:08 left.

The running attacked showcased its teeth in the second quarter at 12:37 when the Bearcats pulled off a reverse handoff to Imoni Donadelle who ran it in for a 59-yard touchdown.

A drive later Northwest continued its use of trickery on a fourth down from the Gorillas 35. Parker Sampson lined up for the 52-yard field goal before motioning to the wideout position and Hohensee replaced him in the backfield. Hohensee rolled out to the left before he found Andrews streaking down the middle and with a bobbling catch and hurdle at the 10 he was in the end zone.

Just like that the Bearcats were up 28-7 with 6:21 left in the second, with the help of Andrews’s career-high three touchdown receptions. Andrews came into the contest with six career touchdowns and he hauled in three for the day.

Pittsburg State stopped the bleeding at 4:42 in the second after a 50-yard pass led to a six-yard touchdown pass from Mak Sexton to Bryce Murphy to cut the led to 28-14.

Earlier in the first Northwest rallied after a Gorilla touchdown and for the Bearcats repetition is key. So after the touchdown Northwest moved the ball down the field and converted with a Parker Sampsonj 41-yard field goal to take a 31-14 lead at the half.

The second half told a different story as defense reigned supreme as both teams were held in check. Northwest held the Gorillas to a field goal in the second half and forced three turnovers. Following the Pitt State field goal, the Gorillas recovered the onside kick to keep hope alive. But the Bearcat defense once again stood solid and forced a turnover on downs and gave the ball back to the offense to finish the Gorillas. Wright did just that as he took the ball back into the end zone with a 48-yard touchdown run to make it 38-17.

After an interception from Trey Washington, the Bearcats kneeled out the clock to finish out the 38-17 triumph.

Northwest will be on the road next week at Nebraska-Kearney. Kick is set for 2 p.m. in Kearney, Nebraska.

Previous Post: « Cardinals bats silenced again. Down 2-0 in NLCS
Next Post: Most government offices are closed in Missouri for Columbus Day »