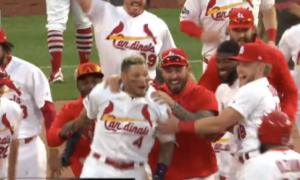 The Cardinals and Braves are going to a decisive Game Five in their NL Division Series.  Yadier Molina tied Game Four with a single in the eighth and won it with a sac-fly in the 10th as the Cardinals beat the Braves 5-4 in St. Louis.  Marcell Ozuna homered twice and Paul Goldschmidt also went deep as the Redbirds evened the best-of-five series at two.  Miles Mikolas got credit for the win, while Julio Teheran took the loss for Atlanta.  Ozzie Albies hit a two-run homer in the fifth to give the Braves a 4-3 lead.  Atlanta will host Game Five on Wednesday.

No one in Cardinals history has more postseason hits than Molina’ 93. (Albert Pujols-88, Jim Edmonds-61). No Cardinals player has appeared in more playoff games than Molina’s 93.

(Washington, DC) — The Nationals beat the Dodgers 6-1 in D.C to force a winner-take-all Game Five in the NLDS. Max Scherzer worked out of a bases-loaded jam in the seventh, allowing just four hits and one run in seven frames for the win. Ryan Zimmerman lofted a three-run homer in the fifth and Anthony Rendon also drove in three Washington runs. Justin Turner homered in the first for Los Angeles. Julio Urías took the loss in relief. The Dodgers host Game Five on Wednesday.

(St. Petersburg, FL) — The Rays are still alive after a 10-3 rout of the Astros in Game Three of their AL Division Series in St. Pete. Kevin Kiermaier clubbed a three-run homer in the second inning, while Ji-Man Choi, Brandon Lowe and Willy Adames all tacked on solo shots for the Rays, who trail 2-1 in the best-of-five series. Charlie Morton struck out nine over five innings of one-run ball for the win. Zack Greinke was rocked for six runs in less than four frames for Houston to suffer the loss. Jose Altuve homered in the first inning and Yuli Gurriel added a two-run single in the sixth for the Astros. Game Four is Tuesday in St. Pete.

(Minneapolis, MN) — The Yankees are headed to the American League Championship Series. They finished off a three-game sweep of the Twins with a 5-1 win in Game Three of their AL Division Series in Minnesota. Gleyber Torres and Cameron Maybin hit solo homers for New York, which handed the Twins their record 16th consecutive playoff loss dating back to 2004. Didi Gregorius had a pair of RBI singles for the Yanks, who will play either the Astros or Rays in the ALCS. Chad Green got the win and Aroldis Chapman the save. Jake Odorizzi took the loss. Eddie Rosario homered in the eighth for Minnesota.

Previous Post: « Missouri officers honored for ending 2018 prison standoff
Next Post: Shildt explains just how clutch Yadi was in the 10th inning for the @Cardinals (PODCAST) »