Two southwest Missouri men have been recognized today for going above and beyond to try and save tourists from last year’s duck boat sinking in Branson. Seventeen people died after a storm quickly swept in that July evening and caused the boat to plunge on Table Rock Lake. Marlin Matchett of Monett says he was on the nearby Branson Belle showboat serving as a first aid worker when the duck boat began to take on water and go under. 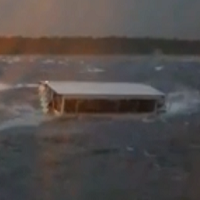 “The showboat wait staff and servers – they were trying to jump in the water,” says Matchett. “They were trying to don life jackets. I was hollering at them and told them to stay out of the water. It was too dangerous. We had about 10 foot waves.”

He says there were several heroes that day.

“There was not a person on the showboat that wasn’t trying to help,” he says. “Everybody was running to help. Part of my responsibly was to protect them and keep them safe. I was not only doing that, but I was also trying to rescue the people that I could rescue.”

Stone County Sheriff’s Office Sergeant Shawn Fields, who was working security on the Branson Belle, was given the state’s highest public safety award today. Missouri Public Safety Director Sandy Karsten awarded Fields with the Medal of Valor for jumping into the water and rescuing victims.

“In the midst of a dangerous, unrelenting storm, sergeant Fields took immediate and decisive action. Without specialized equipment, he bravely risked his own life by jumping into the roiling Table Rock Lake,” says Karsten.

Eighteen first responders and civilians were honored for their extraordinary acts in 2018 during today’s ceremony in Jefferson City. Missourinet will highlight their stories throughout the week.