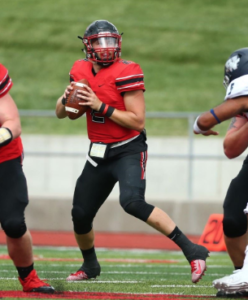 17th ranked Central Missouri Mules Football improved to 5-0 with a 70-point outburst in a 71-42 win over Missouri Southern. The Mules pulled away in the second half, outscoring the Lions 43-14 on their way to the win. Mules QB Brook Bolles’ seven touchdown passes are a new Central Missouri school record. Bolles moved up into fifth all-time in career touchdown passes with 47. His 421 passing yards are the eighth most in a game all-time. Wide receiver Zach Davidson matched a UCM record with his four receiving touchdowns. The only other time it was done was almost 59 years to the day, by Larry Shepard on October 1, 1960.

The No. 7-ranked Northwest Missouri State football team moved to 5-0 with a 34-23 road victory over the Emporia State Hornets on Saturday at Welch Stadium.The Bearcats trailed 17-12 at halftime, but outscored the Hornets 22-6 in the second half. It was the first time since 2003 that Emporia State held the halftime lead against Northwest … Northwest has defeated Emporia State in 27 straight meetings.

The Truman State offense churned out 615 yards with a whopping 423 on the ground in moving to 5-0 on the season following a 52-7 victory over Southwest Baptist University on Saturday night. Three Bulldogs rushed for over 100 yards led by Jordan Salima’s season-best 155 yards on 18 carries. Jaylin Jefferson averaged 34 yards on his three attempts for 103 yards and a touchdown. Cody Schrader scored three rushing touchdowns and gained 119 yards on 12 attempts.