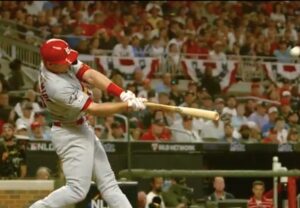 Marcell Ozuna and Kolten Wong each doubled in two in the ninth inning and the Cardinals held on for a 7-6 win over the Braves in Game One of their NLDS in Atlanta.

It was Paul Goldschmidt’s homer in the eighth inning that sparked the Cardinals.  Matt Carpenter later hit a pinch hit single to tie the game at three for St. Louis.  Cardinals manager Mike Shildt says it was obvious that Goldschmidt’s bomb woke up the dugout.

The Cards had a 7-3 lead in the ninth before the Braves fought back in the bottom half.  Carlos Martinez surrendered a two-run homer to Ronald Acuna Jr. and a solo shot to Freddie Freeman before closing it out but Shildt was happy with the Carlos recovered.

Goldy says, “Not so fast!” pic.twitter.com/dUt9k1DIW3

In a one run game I’ll take the @Cardinals bats over the @Braves bullpen past the 7th inning. Then a Flaherty win on Friday. I can easily see the Redbirds coming home up 2-0 #TimeToFly