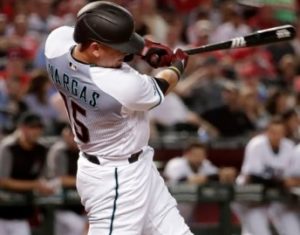 (Phoenix, AZ) — Dexter Fowler led off the game with a home run. 6 hours and 53 minutes later, John Brebbia gave up a bases-loaded single to Ildemaro Vargas with two outs in the 19th inning as the Cardinals lost 3-2 to the D’backs in Arizona. Andrew Miller gave up a game-tying solo shot to Vargas in the ninth to force extra innings. Fowler and Paul Goldschmidt hit home runs for St. Louis. The Cards used 11 pitchers and the D-backs 13.

Flaherty loses his no-hitter when the all hits the seems between the grass and dirt.  Goldy nearly made the play barehanded

(Cincinnati, OH) — Ryan Braun went 2-for-3 with a home run as the Brewers inched closer to a playoff berth with a 4-2 win over the Reds in Cincinnati. Yasmani Grandal had an RBI double and Keston Hiura’s sac-fly snapped a 2-all tie in the third to put Milwaukee in front for good. Brent Suter got the win and Josh Hader his 36th save. The Brewers’ magic number to clinch a wild card berth is one. Sonny Gray gave up three runs in five innings to take the loss. Aristides Aquino and Tucker Barnhart drove in runs in the first inning for the Reds.

(Kansas City, MO) — Bubba Starling hit a two-run double and scored on a throwing error in a five-run third inning as the Royals beat the Braves 9-6 in Kansas City. Nicky Lopez contributed three hits and two RBI, and Ryan O’Hearn also drove in two for KC. Danny Duffy allowed three runs over five innings for the win. Julio Teheran failed to make it through the third and took the loss. Francisco Cervelli and Ozzie Albies homered for Atlanta, which will have to win its final four games to reach 100 wins.

(Pittsburgh, PA) — The Pirates had a seven-run seventh inning behind five Cubs errors as they blew them out 9-2 in Pittsburgh. Kevin Kramer drove in two on a double in the seventh, while Erik Gonzalez added a two-run homer in the eighth. Francisco Liriano pitched a spotless inning to get the win for Pittsburgh, which snapped a nine-game skid. Nico Hoerner went 2-for-4 and drove in both runs for the Cubs, who have dropped seven straight. Kyle Hendricks gave up six runs in as many innings to take the loss.