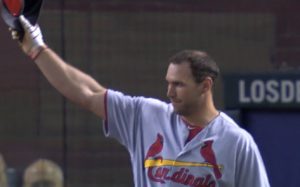 (Phoenix, AZ) — The Cardinals hit four home runs as they held on to beat the D’backs 9-7 in Phoenix. Tommy Edman, Paul Goldschmidt, Yadier Molina and Harrison Bader all went deep for St. Louis, which won its sixth in-a-row. Adam Wainwright improved to 14-and-9 and Carlos Martínez recorded his 24th save. The Cards lowered their magic number to three ahead of the second-place Brewers in the NL Central. The series continues tonight with Jack Flaherty facing Arizona’s Mike Leake.

(Phoenix, AZ) — Kolten Wong isn’t playing in the Cardinals’ final road series of the regular season against the D’backs. The second baseman injured his left hamstring in a victory over the Cubs last Thursday. He was diagnosed with a Grade 2 hamstring strain. Wong hopes to make it back to the lineup this weekend against the Cubs at Busch Stadium.

(Cincinnati, OH) — The Brewers get back to work tonight after having Monday off. They open a three-game series against the Reds in Cincinnati. Adrian Houser will oppose the Reds’ Sonny Gray. The Brewers will close out the regular season with three games at Colorado this weekend.

(Cincinnati, OH) — The Brewers enter play tonight in control of the second NL wild card. They’re a half-game behind the Nationals for the top wild card and four games clear of the Cubs for the second wild card with six to play. Milwaukee has won four in-a-row and 15 of its last 17 games.

(Pittsburgh, PA) — The Cubs visit the Pirates tonight. Kyle Hendricks opposes Pittsburgh’s Mitch Keller. Chicago is looking to end a six-game losing streak. The Cubs trail the Brewers by four games for the second NL wild card spot with six games to play. The finish at St. Louis this weekend.

>>Royals’ Yost Retiring After This Season

(Kansas City, MO) — The Royals are looking for a new manager for the first time since 2010. Ned Yost, who managed the team to the 2015 World Series championship, announced he is retiring after this season. The 65-year-old has more wins, 744, and more losses, 836, than any Royals’ manager with five games left. The Royals have posted back-to-back 100-loss seasons and have not had a winning year since the World Series. Possible candidates to replace Yost are Royals’ special advisor Mike Matheny, a former Cards’ manager, and bench coach Dale Sveum.

>>Duffy Will Start Tonight For Royals

(Kansas City, MO) — The Royals will open their final homestand of the season tonight with the first two games against the Braves at The K. Left-hander Danny Duffy will start the first game for Kansas City. The Braves will counter with Julio Teheran. It will be the final five games for manager Ned Yost, who announced he is retiring after this season.