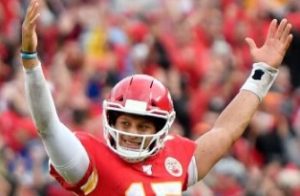 (Kansas City, MO) — Patrick Mahomes threw for 374 yards and three touchdowns to guide the Chiefs to a 33-28 win over the Ravens in Kansas City. LaSean McCoy ran for a touchdown and caught a touchdown pass. Mecole Hardman hauled in an 83-yard TD pass from Mahomes as KC improved to 3-and-0. Mark Ingram ran for 103 yards and three TDs in defeat. Lamar Jackson completed only 22 of 43 passes for 267 yards, but did run for a touchdown in the fourth quarter for Baltimore, which lost for the first time in three games.

(Green Bay, WI) — Aaron Jones found the end zone twice as the Packers topped the Broncos 27-16 in Green Bay. Aaron Rodgers threw for 235 yards and a score on 17-of-29, while Marquez Valdes-Scantling had six catches for 99 yards and a touchdown. Preston Smith matched a career-high with three sacks as Green Bay moved to 3-and-0. The vaunted Denver defense failed to record a sack or force a turnover for the third-straight game. Phillip Lindsay ran for 81 yards and a pair of scores while Joe Flacco threw for 213 yards and an interception. The Broncos are 0-and-3 and are winless on the road against the Packers.

(Minneapolis, MN) — Dalvin Cook surpassed 100 rushing yards for the third straight week as the Vikings ran past the Raiders 34-14 in Minnesota. Cook finished with 110 yards and a touchdown on 16 carries, while Adam Thielen ran in for a score and added a TD catch in the victory. Kirk Cousins finished 15-of-21 for 174 yards and a TD as the Vikes moved to 2-and-1. Derek Carr was 27-of-34 for 242 yards, two TD’s and an interception for Oakland, which slipped to 1-and-2. J.J. Nelson and Tyrell Williams both had TD catches in defeat.