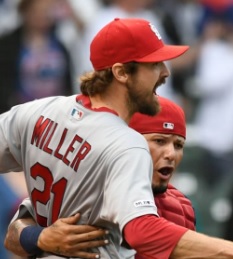 (Chicago, IL) — The Cardinals scored two runs in the top of the ninth as they took down the Cubs 3-2 in Chicago. Dexter Fowler hit a sacrifice fly and Paul Goldschmidt doubled in a run to give the Cardinals the lead. Paul DeJong homered for St. Louis. Miles Mikolas only gave up two runs over seven and two thirds innings for the Cardinals. Tyler Webb got the win for St. Louis, which completed the four-game sweep and clinched a playoff berth. Nicholas Castellanos homered for the Cubs. Yu Darvish struck out 12 over eight and one third innings but took the loss for Chicago, which has lost six straight.

It was the first time since May of 1921, the Cardinals swept a four-game series in Chicago.

(Milwaukee, WI) — Eric Thames homered twice as the Brewers held off a late Pirates rally in a 4-3 win from Miller Park. Thames crushed a solo shot in the fourth for Milwaukee before tacking on a two-run bomb in the sixth. Orlando Arcia started the scoring with a solo shot in the second. Gio Gonzalez worked three-and-a-third innings of relief for the win and Josh Hader notched his 35th save. The Brewers are four games ahead of the Cubs for the NL’s final Wild Card. The Bucs scored three times in the eighth inning to make it a game, but the rally fell short. Trevor Williams took the loss for Pittsburgh with five frames of two-run ball.

(Minneapolis, MN) — Miguel Sano homered twice to drive in four and Nelson Cruz blasted his career 400th long ball and scored four runs as the Twins ripped the Royals 12-8 in Minneapolis. Eddie Rosario contributed three doubles and three RBI. Marwin Gonzalez also drove in three runs as the Twins wrapped up play at Target Field with a 46-and-35 record. Whit Merrifield had three hits for Kansas City to reach 200 for the season. Nick Dini hit a two-run homer in defeat. Starter Jorge Lopez gave up seven runs in less than three innings as the Royals lost their 100th game for the second straight season.