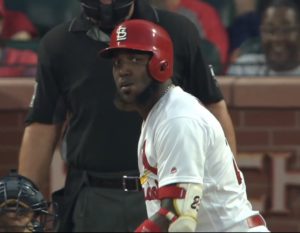 >>Cards Double Up Nats Behind Ozuna

(St. Louis, MO) — Marcell Ozuna’s two-run, ground-rule double broke a 2-all tie in the seventh inning as the Cardinals beat the Nationals 4-2 in St. Louis. Ozuna also hit a two-run homer in the first inning and threw a runner out at the plate. Dakota Hudson pitched seven innings of two-run ball for his 16th win as the Cards snapped a two-game skid. Carlos Martinez collected his 20th save. Victor Robles singled in a run and Anthony Rendon hit a solo homer for Washington, which has lost three-of-four. Sean Doolittle took the loss.

>>Royals Surge Past A’s In Ninth

(Oakland, CA) — The Royals scored twice in the top of the ninth inning to surge past the A’s 6-5 in Oakland. Brett Phillips tied the game with a solo homer before Adalberto Mondesi doubled in the go-ahead run. Mondesi also tripled in a run in the first and Jorge Soler crushed his 45th home run of the season. Kevin McCarthy got the win and Ian Kennedy his 30th save. Reliever Liam Hendricks blew the save and took the loss for Oakland. Marcus Semien drilled his 31st homer of the year and Matt Olson doubled twice and had two RBI. The A’s had their six-game winning streak snapped.

(Chicago, IL) — Kyle Schwarber belted a three-run homer in the first inning to propel the Cubs to an 8-2 win over the Reds at Wrigley Field. Nicholas Castellanos contributed a two-run double. Alec Mills picked up the win in relief with two scoreless innings. The Cubs won their fifth straight and are second in the NL wild card standings, a half-game behind the Nationals. Reds starter Kevin Gausman took the loss. Curt Casali and Phillip Ervin plated runs for Cincinnati, which had won three of its previous four games.

(Chicago, IL) — Chicago Cubs first baseman Anthony Rizzo will miss at least five days as he deals with a sprained ankle. Rizzo’s ankle will be immobilized in a boot for the next five-to-seven days before being re-evaluated. He turned his right ankle during Sunday’s win over the Pirates. The 30-year-old slugger is batting .289 with 26 home runs and 93 RBI for the Cubs.

(Milwaukee, WI) — Cory Spangenberg’s two-run triple snapped a 1-all tie in the fourth inning as the Brewers beat the Padres 5-1 at Miller Park. Spangenberg also singled in a run and Travis Shaw homered for Milwaukee, which has won 10 of its last 11. Zach Davies earned his 10th win.