(NASCAR)—Round one of the NASCAR playoffs has gone to Martin Truex Jr., who avoided problems that hit several other contenders for the championship. Truex started 24th but took the lead for good with twenty laps left. His win guarantees a slot in the round of twelve that will continue to compete for the Cup title.

Clint Bowyer, who surprised himself and a lot of other people by winning the pole, struggled with his car’s balance for much of the race and was done in by a tire rub resulting from a bum with Paul Menard about seventy laps from the finish. He had to pit under the green and finished 25th, a lap behind Truex.

The result leaves him fifteenth, twenty-one points below the cut line with only two races to make up the deficit. He’s had three straight top tens on the small track, including a third place in the spring race.

(INDYCAR)—Indycar wraps up its season next weekend at Laguna Seca. It’s a double-points race and the championship is general conceded to be Josef Newgarden’s (right, at Gateway International) to lose. Newgarden goes into the race with a 41 point lead over Alexander Rossi and is up on Simon Pagenaud by 42. 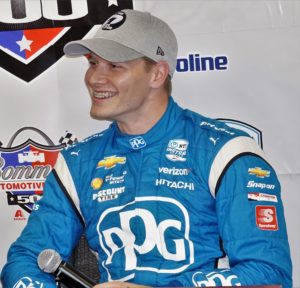 The Course is an eleven-turn, 2.258-mile road course. Drivers admits it’s a tough course on which to pass and contenders say a solid qualifying run is critical.

The race will be the 321st IndyCar start for five-time champion Scott Dixon, putting him sixth on the list of career starts. Mario Andretti tops the list with 407. Dixon goes into the race fourth in the standings and is in a must-win situation if he is to contend for a sixth title.

(FORMULA 1)—Formula 1 was off this weekend. It resumes next weekend with the Grand Prix of Singapore, the fifteenth race in the 22-race schedule. Mercedes teammates Lewis Hamlton and Valtterri Bottas are at the top of the standings with Red Bull’s Max Verstappen holding off the two Ferrari drivers, Charles Leclerc—the winner of the last two Grands Prix, and Sebastian Vettel.

Previous Post: « Missouri governor: meeting with Krewson and Page “was about boots on the ground”
Next Post: Chiefs seize early control of the AFC West after two games »