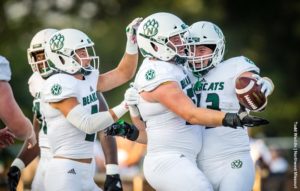 Down 28-7 late in the second quarter, Missouri Western pulled to within one score at 28-21 following a 23-yard touchdown pass from Wyatt Steigerwald to Burton Cooper with 10:35 left in the third quarter, but the No. 6-ranked Northwest Missouri State Bearcats held on for 45-35 victory over Missouri Western in St. Joe. Steigerwald gave the Griffons their first lead of the contest when he scored from three yards out with 12:38 to play in the fourth quarter. However, Northwest QB Braden Wright scored his first touchdown of the season on the ground when he found the end zone from 10 yards out on first and goal with 8:50 to go in the fourth quarter. Wright’s score gave Northwest a 38-35 advantage. Wright’s touchdown finished an eight-play, 89-yard drive. Wright scored 11 rushing touchdowns last season.

_______
Central Missouri Mules Football put on quite the show in front of their home faithful. In a thrilling win, the Mules stormed back in the second half for 34-30 win over No. 11 Fort Hays State. The Mules scored 27 in the half, 13 in the final 5:35 to pull out a come-from-behind win over last year’s MIAA co-champion. UCM was down nine facing 4th and 13 from their own 13 yard line. Zach Davidson, standing in his own endzone in punt formation, took the snap then darted left and picked up 22 yards to keep the drive alive. One play later, Bolles found a wide open Shae Wyatt for a 65-yard score to bring the Mules to within two, 30-28, and the crowd back to it’s feet.

On the Tigers ensuing possession, Kolesen Crane jarred the ball loose from quarterback Chance Fuller and Cameron Clay recovered to give the Mules the ball on the UCM 45 with 2:46 left to play.
Moments later, QB Brook Bolles hit a streaking Cameron Saunders for a 36-yard score, putting the Mules on top 34-30.

_______
The Missouri Southern football team scored 21-unanswered points during the third quarter, but the comeback came up just shy as the Lions fell at home to Nebraska-Kearney, 39-27.

_______
In their return to MIAA Conference play, the Lincoln football team forced seven turnovers and Hosea Franklin rushed for 251 yards and a pair of touchdowns, but the Blue Tigers fell to Washburn, 49-27.