You are here: Home / Legislature / Parsons move out of Governor’s Mansion for a major remodel

Gov. Mike Parson and First Lady Teresa Parson have given up the Governor’s Mansion life for about five months while a major rehab is done to the historic home. They’ve taken up temporary residence on the Missouri National Guard base while $3.8 million in improvements are completed to the three-story red brick mansion. 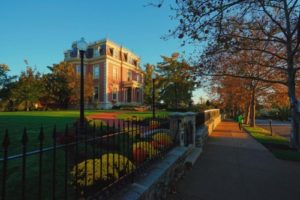 The Neo-Renaissance style four-bedroom home was built in 1871 and sits atop a bluff overlooking the Missouri River. It was added to the U.S. National Register of Historic Places in 1969.

With age comes problems – a dip in the master bedroom floor from a rotting support beam and leaky pipes that damaged walls. During a tour of the renovations, Project Manager Sherry Kempf says structural issues are being addressed, along with improvements to the flooring, ceilings, windows, security system, carpentry, insulation, heating, air conditioning, electrical, plumbing, sewer and fire alarm systems.

“We’re trying to place them carefully so they can do their job but not disrupt the historic nature of the building,” she says. “As the wallpaper and the plaster and all those things – if you don’t have proper temperature and humidity control, they’ll suffer and you’ll see more cracking and damage to the building. Hopefully this project will eliminate a lot of that future damage.”

Many cosmetic changes need to be made to the home, but Kempf says they are not included in this project.

Kempf says the Parsons did them a favor by vacating the residence during work. Moving the first family from floor to floor during the project would have cost more money.

First Lady Teresa Parson tells Missourinet they miss the mansion, but the work needed to get done.

“It’s quiet out here. We like the atmosphere out here and everything. We can’t have the guests that we were having and was able to have at the mansion. We kind of are people people,” Parson says.

What does she miss the most? The Mansion’s convenient location.

“The governor could travel back and forth much quicker. It’s a little further distance to come out here,” she says.

Since the Jefferson City airport has been damaged by flooding, hopping on a state plane hasn’t been as easy either. The governor flies out of the Columbia Regional Airport, instead of the airport across the river from the Mansion.

The bonding for the Mansion renovations was issued in 2015 and 2016. The improvements are expected to wrap up in October, just in time for kids to stop by for a Halloween treat. A festive Christmas time gathering is also planned.

Mansion tours are projected to resume around January. About 50,000 to 60,000 people tour the home each year.