(NASCAR)—Erik Jones tamed “The track too tough to tame” just before 1 o’clock this morning, locking up one of the places in the sixteen-driver championship runoffs that start in two weeks. It’s Jones’ second career win, his first this year. Teammate Kyle Busch tried so hard to run him down in the closing laps that he put his car into the wall twice in the last four laps. He still managed to finish third, giving up second to Kyle Larson. 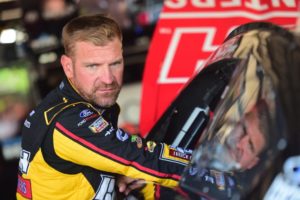 Clint Bowyer, our sometime Missourian, ran as high as fourth during regular racing and led a lap during the last round of pit stops. His sixth-place finish moved him from two points out of the playoff rounds to eight points inside the sixteen. He’ll need a victory or at least another strong run next week at Indianapolis to protect his position. Daniel Suarez and Ryan Newman are tied for the final playoff slot.

Bowyer had a strong run in the Brickyard 400 last year, won the first stage, and finished fifth. However, he has only four top-tens in thirteen races there. He’s winless this year after taking two races last year.   He’s racing to make the runoffs for the eighth time.

This morning’s win was the thirteenth of the year for Joe Gibbs Racing. Jones’ teammates, Kyle Busch, Denny Hamlin, and Martin Truex Jr., have won four times each. The race ended late because the start was delayed about four hours because of heavy rain and the time it took to dry the track and the pit area. To kill some of the time, Bowyer grabbed an NBC microphone and did a television interview with a fan waiting out the delay in the grandstand. When the fan said he’d come to see the race and didn’t care about the weather, Bowyer exclaimed, “That, ladies and gentlemen, is a race fan!”

NASCAR decided to run the race Sunday night despite the late hour because it was a sold-out event and there were concerns about Monday’s weather because of the approach of Hurricane Dorian. The governor of South Carolina has ordered coastal counties evacuated, a move that includes road reversals on highways near the track.

(INDYCAR)—Will Power has bounced back from a disappointing crash at Gateway last weekend to win the IndyCar Grand Prix of Portland, his 37th career victory that ties him with Sebastien Bourdais for sixth place on the all-time winners list. 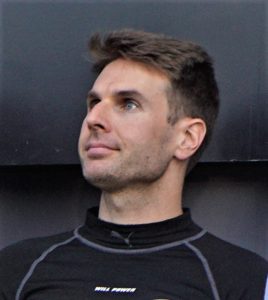 Power had the race well in hand until a caution led to a restart with four laps left and rookie Felix Rosenqvist pressing him. But Power pulled away to a 2.8-second win, half of that margin being added on the first lap when the track went back green.

Defending IndyCar champion Scott Dixon led the first half of the race before a battery failure forced him into a lengthy pit stop that left him sixteenth. It’s the second-straight race in which an unusual equipment failure has knocked Dixon out of any chance of winning his sixth series title. He was among the leaders last week at Gateway when something put a hole in his radiator.

Points leader Josef Newgarden came home fifth. Alexander Rossi’s third-place finish allowed him to regain second place in the standings. Newgarden head into the last race of the season—at Sonoma in three weeks—with Newgarden 41 points up on Rossi and 42 up on Indianapolis 500 winner Simon Pagenaud. The championship is not guaranteed for Newgarden, however. The next race awards double points.

A. J. Foyt’s team got some bad news this week—the loss of longtime sponsor ABC Supply, which says, “It’s time to scale back our racing program.”

ABC has been with Foyt since 2005 as the team’s prime sponsor. Foyt says there are “three or four potential sponsors” and ABC will be on the cars at Indianapolis. He tells Robin Miller with RACER Magazine, “I’m going to keep our shops in Indianapolis and Houston. I just want people to know we’re not leaving.”

Foyt says the team will be racing next year although the driver lineup is unclear. Tony Kanaan and Matheus Leist were 15th and 19th in the points before this weekend’s race and observers expect that to change. Leist had one of his best finishes of the year this weekend, eighth, and Kanaan was twelfth. 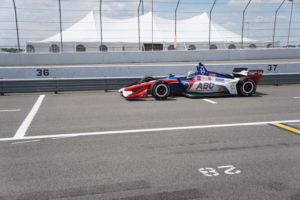 Kanaan, (right) who had his best finish of the year last weekend, a third at Gateway, is hoping for one more year before he retires. Liest says he’d like to stay with Foyt and in IndyCar but he has been talking to some other teams. The problem for both drivers is that there aren’t many quality seats available.

IndyCar has released its schedule for next year. Seventeen races will include five ovals and five street circuits. The schedule is being adjusted so that it does not conflict with the Olympics coverage by broadcast partner NBC. The biggest change, however, is that Pocono has been dropped as a venue, replaced by Richmond. 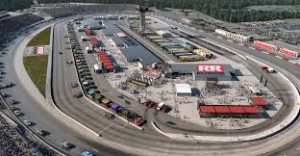 Richmond is a D-shaped three-quarter mile track in Virginia. IndyCar raced there from 2001 through 2009. Next year’s race will be June 27.

IndyCar will not race from mid-July until mid-August because of the three-weeks of Olympic games in Tokyo.

(FORMULA 1)—Charles Leclerc’s first Formula One win was a bittersweet one for the Ferrarri driver who lost good friend and former competitor Anthoine Hubert, who was killed in a Formula Two crash on Saturday. Leclerk dedicated his victory to Hubert’s memory.

Leclerc led all the way but had to hold off Mercedes driver Lewis Hamilton, was seven seconds behind with ten laps to go but closed to less than a second back by the end. Valtteri Bottas, also in a Mercedes, finished third while Leclerc’s teammate Sebastian Vettel finished a disappointing fourth. Vettel had started alongside Leclerc when the green flag at the Grand Prix of Belgium, the first race after F1’s traditional August break.

Formula 1 heads to Monza next weekend, considered as much the marque’s home track as any on the circuit.