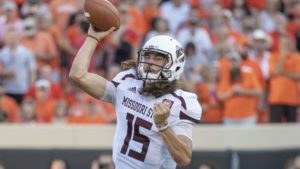 A late first-half scoring surge helped Northern Arizona in a win over Missouri State, 37-23 in the season-opener for both teams at Walkup Skydome. NAU scored 17 points in the final 8:10 of the second period to snap a 3-3 tie, as wide receiver Brandon Porter accounted for two Lumberjack scores as part of the game’s critical stretch.

In all, Porter passed for a touchdown and caught two more, finishing the game with six receptions for 140 yards, while completing his lone pass of the game for a back-breaking 55-yard scoring strike. NAU quarterback Case Cookus turned in a big night as well, connecting on 18-of-29 passes for 290 yards and two TD tosses to Porter that turned a one-possession game into a 21-point NAU bulge.

The Bears’ third consecutive opening-game loss overshadowed a strong second half by senior quarterback Peyton Huslig, who completed 20-of-35 passes for 289 yards and a pair of touchdowns. Huslig’s prime target—fellow senior Tyler Currie—led the Bears with six catches for 89 yards and a touchdown.

Thursday’s game marked Missouri State’s first season opener against an FCS foe in five years, as well as the Bears’ first-ever game on Arizona soil…With the loss, the Bears fell to 51-54-3 all-time in season openers.

Previous Post: « WATCH: Soler closes in on Royals HR record. Cubs move closer to Cards on their off day
Next Post: SEMO rallies past Southern Illinois in season opener »