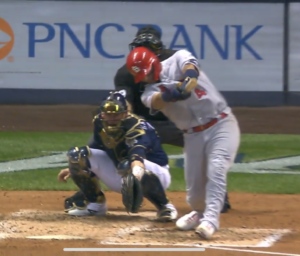 (Milwaukee, WI) — Yadier Molina hit two home runs in the Cardinals’ 6-3 win over the Brewers in Milwaukee. Kolten Wong went 2-for-2 with two RBI as St. Louis won its sixth straight. Miles Mikolas earned the victory after striking out 10 over six innings of one-run ball. The Cards remain three games ahead of the Cubs in the NL Central. The series wraps up today with Jack Flaherty facing Milwaukee’s Jordan Lyles.

(Kansas City, MO) — One day after scoring 19 runs, the Athletics needed just two runs to nip the Royals 2-1 at Kauffman Stadium. Mike Montgomery was the tough-luck loser, giving up two runs, one unearned, while pitching into the seventh. Alex Gordon doubled home Hunter Dozier in the sixth for the KC run. The Royals lost for the 20th time in their last 26 games.