You are here: Home / Sports / Kansas City Royals could be under new ownership 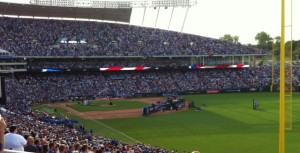 40,000 people are expected at the All-Star Game tonight at Kauffman stadium.

The Royals could be under new ownership soon. Multiple-outlets report Royals owner David Glass is making arrangements to sell the team to Kansas City businessman John Sherman for more than one-billion dollars. Glass, a former Wal-Mart CEO, purchased the team in 2000 for 96-million dollars. Sherman is a minority owner of the Cleveland Indians and would divest himself of his Indians’ share to buy the Royals. The Royals released a statement it is “not in a position to make any comments on published speculation regarding any potential sale.”