You are here: Home / Crime / Courts / Missouri’s Smith: Congress is not the answer to preventing mass shootings (AUDIO)

A southern Missouri congressman who’s one of the top Republicans on Capitol Hill says communities are the answer to preventing mass shootings. 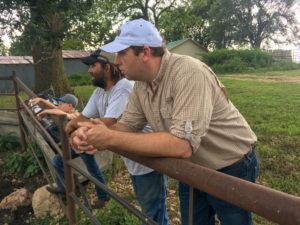 U.S. Rep. Jason Smith, R-Salem, spoke to Missourinet recently at the State Fair in Sedalia. We asked him what role, in any, Congress has in preventing mass shootings.

Smith tells Missourinet the mass shootings in El Paso and Dayton are heartbreaking, adding that it’s heartbreaking any time a life is lost.

“Congress is not the answer, communities are the answer,” Smith says. “There’s a bad mental health problem out there.”

Smith says more people were killed in the United States in 2017 with hammers and clubs than by rifles, citing FBI statistics.

Smith, who represents 30 counties across south Missouri, is critical of some Democratic proposals, in response to the killings in El Paso and Dayton.

“You look at these two instances (El Paso and Dayton), they (suspects) both went through background checks. Assault weapons are banned. So the comment from members of Congress who say ‘let’s been ban assault weapons,’ they are banned,” says Smith.

Meantime, U.S. Rep. Lacy Clay, D-St. Louis, is calling on Congress to approve legislation that would give local governments the authority to pass their own gun regulations.

The “St. Louis Post-Dispatch” reports 13 children have been killed in shootings in the city of St. Louis in 2019.

Congressman Clay has called an urgent town meeting for Wednesday evening at 6:30 at Harris-Stowe State University in St. Louis, to discuss gun violence. Clay says St. Louis and the nation “have reached a tipping point,” as easy access to guns has created what he calls a public health emergency.

Clay will be joined at Harris-Stowe by St. Louis Board of Alderman President Lewis Reed, Alderman John Muhammad, St. Louis Public Safety Director Jimmie Edwards and others. The meeting is open to the public.

Click here to listen to Brian Hauswirth’s full interview with U.S. Rep. Jason Smith, R-Salem, which was recorded on August 15, 2019 at the Missouri State Fair in Sedalia: