(INDYCAR)—Takuma Sato’s last place-to-first place win just across the river from St. Louis was one of many stories in a race that had far more twists and turns than did the track. The podium celebration after the race was populated by most of the members of IndyCar’s “old guard” after a stirring night on the track. 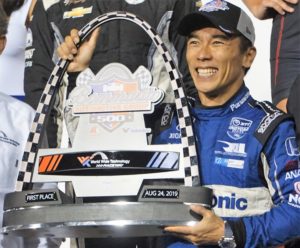 For Sato, the race culminated a tumultuous week of criticism after he was involved in a first-lap crash in a 500-mile race last weekend that took out several cars and loosened up a tight points chase. Although he started fifth, he dropped to last after another opening lap contact with some other cars. Sato, who is 42, held on to beat Ed Carpenter, who is 38, by less than .04 second. Tony Kanaan, 44, ran second for a good part of the race until Carpenter got past him and then came within a half-car length of catching Sato at the end. It’s the closest victory margin this year in IndyCar racing. 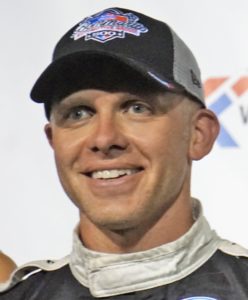 Carpenter, who runs only oval races, had his best finish of the year. He has finished in the top six in three of the five races he’s run. It was his first podium finish and only the second since 2014. Teammate Spencer Pigot was running in the top ten before he touched wheels with Charlie Kimball and hit the wall.
The combined ages of the three drivers on the podium, 124 years, exceeded the combined ages of the next four drivers: Santino Ferrucci, who is 21, Conor Daly, 27, Josef Newgarden, 28, and Simon Pagenaud, another of the “old guys” at 35. 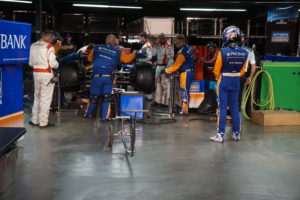 The race turned disastrous for a couple of leading contenders in the points chase. Will Power went into the wall, the first car out, and was credited with 22nd place. Scott Dixon’s car was taken to the garages with a hole in its radiator, leaving him to stand aside while his crew worked to get him back on track. He completed 136 of the 248 laps and picked up one points-paying position, thanks to Pigot’s crash.
Sato called his victory the most significant one since winning the Indianapolis 500 in 2017. “This win is so special—beside the Indy 500…This is just so emotional. Gave me an unbelievable boost….a great story.”
Sato didn’t want to talk before the race about last weekend’s incident at Pocono. He said it was behind him and it was time to move on.
Points leader Josef Newgarden, who started on the pole and led the early laps, faded to seventh at the end. This year’s Indianapolis 500 winner, Simon Pagenaud, finished fifth and moved past Alexander Rossi into second place in the points chase, down 38 points with two races left, the final one being a double-points race. Rossi made it to thirteenth place and trails Newgarden by 46. Dixon’s misfortune appears to have taken him out of contention for his sixth title. He now trails Newgarden by seventh points. 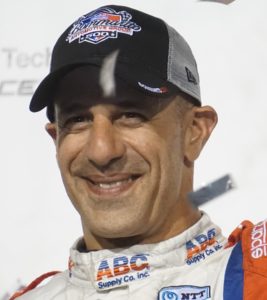 The happiest driver behind Sato had to be Tony Kanaan, who hasn’t seen a podium finish in more than two years and who has struggled this year while driving for A. J. Foyt’s team. He, Sato, and Carpenter found themselves a lap up on the field when a yellow flag went out because of a Sebastien Bourdais spin with 56 laps left. Kanaan called his third-place finish “very uplifting” for his team. “We’ve been overcoming a lot of adversities throughout the year. We’ve been hearing things, good things and bad things, some support, some people thinking we shouldn’t be doing this…When I joined A. J. Foyt Racing, it was to make this team better. We’ve been struggling quite a bit. This is a great night for us.”
IndyCar races at Portland next weekend before finishing its season at Laguna Seca on September 22.

NASCAR and Formula 1 were off this weekend. NASCAR will run at Darlington next weekend. F1 drivers return after their August vacation with the Belgian Grand Prix next Sunday.