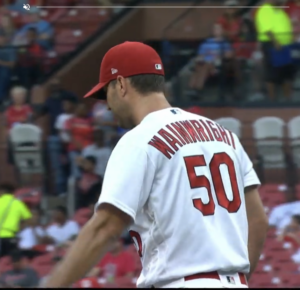 (St. Louis, MO)  —  Mike Moustakas drilled a three-run home run in the first as the Brewers beat the Cardinals 5-3 in a rain-shortened game at Busch Stadium.  St. Louis’ cut into Milwaukee’s early lead with two runs in the fifth and one in the sixth but the game was called after seven-and-a-half innings.  Dexter Fowler and Yadier Molina each had an RBI for the Cards, who dropped to a half-game behind the Cubs in the NL Central.  Adam Wainwright surrendered five runs over five frames to take the loss.  The Redbirds host the Rockies tonight with Miles Mikolas opposing Colorado’s German Márquez.

Wainwright gave up two scratch singles that found holes.  The hardest hit ball in the first inning was a liner from Christian Yelich and the home run to Moose wasn’t bad, an 0-2 pitch that Moose picked off the dirt for a three-run bomb.

(Chicago, IL)  —  Kris Bryant’s go ahead, two-run home run in the eight lifted the Cubs to a 12-11 victory over the Giants at Wrigley Field.  Nicholas Castellanos went 4-for-5 with a two-run homer and an RBI single in the win.  Kyle Schwarber added his own two-run shot and Craig Kimbrel recorded his 11th save as Chicago won its fourth straight.  The Cubs jumped back into first place in the NL Central by a half-game over the Cardinals.  The series wraps today with Kyle Hendricks facing San Fran’s Jeff Samardzija.

(Baltimore, MD) — Whit Merrifield homered for the only Royals run in an 8-1 loss to the Orioles in Baltimore. Kansas City starter Mike Montgomery labored through five innings, giving up five runs on eight hits, including three home runs, three walks and a hit batter. Former-Royal Aaron Brooks allowed one run over five innings to pick up his first win since April 11th. Kansas City dropped two-of-three at Camden Yards and lost for the sixth time in eight games. The Royals will complete a suspended game today in Boston. The score was tied 4-4 in the top of the 10th inning when rain halted play on August 7th.