You are here: Home / Education / Galloway wants armed officers in Missouri schools. How does she suggest paying for it? 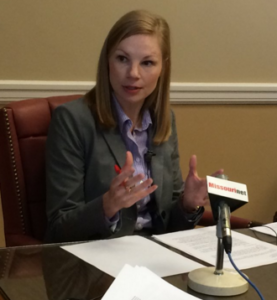 She refers to Parson creating a school safety task force that recommends all Missouri elementary and secondary public schools have an armed officer. The group’s report says about 60% of Missouri’s public schools already have resource officers through local funding.

“In recent days, Missouri students have gone back to school and the issue of school safety is at the top of mind for parents and educators,” Galloway says. “This task force studied our schools’ current safety measures; received public input from parents, educators and law enforcement; and then arrived at concrete recommendations. Now it’s time to act and ensure their work is not collecting dust on a shelf. Teachers should be in charge of teaching our kids. Law enforcement should be in charge of protecting our children.”

If 60% of local jurisdictions are already funding these jobs, why does the state need to get involved?

Galloway says work is being done on cost estimates to fund the positions.

So how does she suggest paying for the jobs? By eliminating what she calls taxpayer dollar giveaways.

“Big businesses get to keep a portion of that sales tax for filing that with the state on time. It really doesn’t make sense that big businesses should get a discount for something they’re required to do by law anyway,” she says. “There are ways to pay for school safety without having to expand government programs or to have a tax increase. There are efficiencies that I find all the time in audits that can pay for this very important program.”

Parson’s office does not have a comment and says it is awaiting Galloway’s formal request.

Galloway, a Democrat, is running for governor and Parson, a Republican, is expected to announce next month his plans to run for the office. The General Election will be held in November 2020.