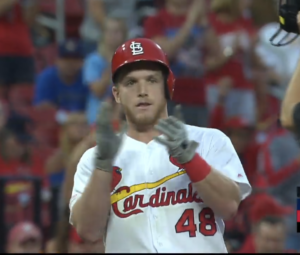 (St. Louis, MO) — Dexter Fowler’s three-run double highlighted a four-run sixth inning as the Cardinals rallied to beat the Brewers 9-4 at Busch Stadium. Kolten Wong drove in two in the seventh for St. Louis, which won its third straight. Tyler Webb got the win in relief for the Cards, who remain in first place in the NL Central by a half-game over the Cubs. The series wraps up tonight with Adam Wainwright opposing Milwaukee’s Adrian Houser.

The Cardinals drew nine walks in the game. Harrison Bader, back from his Triple A stint, hit a triple, walked three times, scored twice and made two diving catches in center field.

(Baltimore, MD) — Brad Keller tossed six scoreless innings, but the Royals lost 4-1 to the Orioles, who snapped an eight-game skid, in Baltimore. Jacob Barnes walked two and then surrendered a three-run homer to Hanser Alberto in the eighth to take the loss. Meibrys Viloria drove home Alex Gordon with a sacrifice fly. Kansas City is 2-and-5 in its last seven.