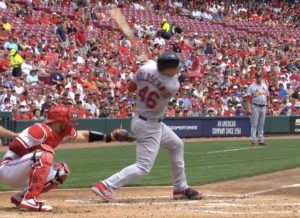 >>Redbirds Hold Off Reds To Win

(Cincinnati, OH) — Paul Goldschmidt hit a two-run homer and Tommy Edman a solo shot and the Cardinals held on for a 5-4 victory over the Reds in Cincinnati. Jack Flaherty gave up a run in five-plus innings to pick up the win. Carlos Martinez notched his 14th save, but not before giving up two runs in the ninth. St. Louis is 7-and-2 in its last nine games. Eugenio Suarez led off the Cincinnati first with his 34th homer. Tucker Barnhart hit a two-run single in the ninth, but the Reds’ rally fell shy. Alex Wood allowed five runs in five innings to take the loss. The teams split the four-game series.

The Cardinals come home for a brief three-game series with Milwaukee. St. Louis up two games in the standings over the Brewers.  St. Louis also got some help from San Diego in the wild card race.

(Kansas City, MO) — Pete Alonso belted his 40th homer, a National League rookie record, in the Mets’ 11-5 win over the Royals in Kansas City. Michael Conforto blasted a three-run shot in the first inning and drove in four New York runs, while Amed Rosario contributed three hits and three RBI. New York is 3-and-1 in its last four games. Kevin McCarthy allowed four runs on four hits and retired only one batter in the Mets’ six-run seventh to take the loss. Nicky Lopez had two RBI in defeat. The Royals went 1-and-4 on their homestand.

(Williamsport, PA) — Nick Castellanos and Jason Heyward homered as the Cubs took down the Pirates 7-1 in Williamsport. Kyle Schwarber drove in two runs with a single. Jose Quintana threw seven scoreless innings and struck out seven to get the win for the Cubs, who have won two in a row. Starling Marte went 3-for-4 and homered for the Pirates. Mitch Keller took the loss after giving up six runs over four and one third innings for Pittsburgh, which has lost two in a row.

(Washington, DC) — The Nationals equaled a team record with eight home runs and led by 13 runs after three innings as they crushed the Brewers 16-8 in Washington. Brian Dozier, who drove in four, and Juan Soto each hit two home runs for the Nats. Matt Adams, Victor Robles, Anthony Rendon and Adam Eaton also homered for the Nats, who are 6-and-1 in their last seven games. Mike Moustakas had three hits, including a three-run shot, and drove in five Milwaukee runs. Ben Gamel and Orlando Arcia also homered in the loss. Starter Chase Anderson gave up 10 runs and retired only seven batters. The Brewers lost four the fourth time in six games.

(Philadelphia, PA) — Joey Lucchesi allowed two runs and three hits over six innings to earn the Padres’ 3-2 win over the Phillies in Philadelphia. Luis Urias hit a two-run homer and Austin Hedges had four hits, including a solo shot in the seventh for the go-ahead run. San Diego won for the third time in four games. Philadelphia lost Bryce Harper in the fifth inning to dehydration after he walked and singled. Recently acquired reliever Jared Hughes took the loss. Jean Segura had two doubles and two RBIs in defeat. The Phillies lost the last two games of the series.