(NASCAR)—It’s not often that the winner of a NASCAR Cup race apologizes for winning but Denny Hamlin did everything but that after the annual night race at Bristol. Hamlin started from the pole, was two laps down at one point, but passed Matt DiBenedetto with eleven laps left and won his fourth race of the year.

DiBenedetto, a popular driver in the garage area, has had the best equipment of his career this year and took the lead on the 396th of 500 laps on the tight .533-mile track. He had learned Thursday that he would not be offered a ride by his owner next year, a word that surprised many of his contemporaries.

Hamlin said he “hated” to pass DiBenedetto—-but racing is racing. DiBenedetto came up .502 seconds short of his first Cup win.

Clint Bowyer had his best finish in more than a month but still fell out of the top 16 drivers in points, with two races to go to determine if he can get back into that sweet sixteen and run for the Cup championship through the last ten races of the year. Teammate Daniel Suarez is two points ahead of him in the standings, at sixteenth. 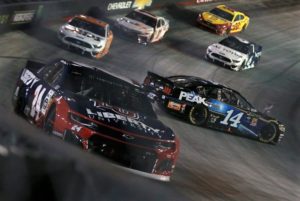 Bowyer was running well as the race neared the halfway point when he thought he had cleared Quin Houff on a pass—but hadn’t. As he moved to the inside, his left rear fender lightly touched Houff’s car, sending Bowyer on a spin. Suarez,who was behind Bowyer, missed him as Bowyer’s car slid up the track AND the wall by inches. The spin cost Bowyer important bonus points in the second stage of the race. Suarez got those points that put him one up on Bowyer.

Bowyer said later he wasn’t thinking about points during the race. “A short track like this, you’re worried about keeping up with the race track, keeping up with your adjustments, track and stuff like that. You ain’t got time to screw with that.”

NASCAR’s next race is next weekend at Darlington, which hasn’t been good to Bowyer. His best finish in thirteen races there is ninth. He has finished 36th and 40th in the last two races there. The last race before the playoffs is at Indianapolis. He was fifth in last year’s Brickyard 400.

(INDYCAR)—First, there was The Crash on the first lap at Pocono. Then there was lightning. And rain. And after 128 of 200 scheduled laps there was Will Power celebrating at an indoor victory circle.

Power won his first race of the year, keeping a string going of thirteen straight years with at least one race win. The shortened race might be the last IndyCar race at Pocono in the foreseeable future.

Five cars were taken out of contention in a first-lap crash during a three-wide run with Ryan Hunter-Reay inside of Alexander Rossi and Takuma Sato on the outside (all three are past winners of the Indianapolis 500) when Sato moved to the left without clearing Rossi. They caught up James Hinchcliffe and sent rookie Felix Rosenqvist on a wild ride along the retaining wall. All five walked away from the wreckage although Rosenqvist was taken to a nearby hospital for a checkup.

Power had to start from the back when the race resumed 45 minutes after being red-flagged but he caught a big break when he pitted just as caution came out for Spencer Pigot’s crash and came out second behind this year’s “500” winner, Simon Pagenaud. He quickly took the lead under green then gave it up during a fuel-saving run and remained second behind Scott Dixon until getting past him on lap 115. Thirteen laps later the race was stopped because of dangerous lightning in the area, with Power in the lead.

Josef Newgarden remains in the points lead with his sixth-place finish, 35 ahead of Rossi—who lost ground because of the crash—and forty ahead of Pagenaud. Dixon closed to within 52 points with his second place finish.

IndyCar and Pocono do not have a contract for the future. Track owners say they’d like to keep hosting IndyCar races although some drivers and former drivers question the safety of the track for high-speed open-wheel racing. One is Robert Wickens, who was left partially paralyzed after last year’s crash at Pocono. He Tweeted, “How many times do we have to go through the same siuation before we can all accept that an IndyCar should not race at Pocono. It’s just a toxic relationship and maybe it’s time to consider a divorce.”

Sometime competitor Stefan Wilson, whose brother, Justin, was killed when he was struck by debris from a Pocono crash in 2013 tweeted, “Maybe the teams can all come together and instead of paying crash damage at Pocono can just put it into a fund to pay sanctioning fee for a Watkins Glen return.” He admitted he was “mostly joking.”