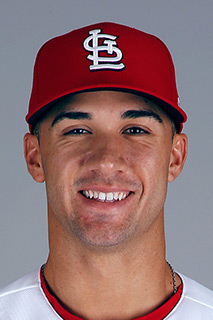 (Kansas City, MO) — Jack Flaherty allowed three hits and struck out seven in seven innings as the Cardinals shut out the Royals 2-0 in Kansas City. Carlos Martinez closed it out for his 13th save. Paul Goldschmidt and Tommy Edman drove in the runs for St. Louis, which won its fourth straight. Glenn Sparkman was the losing pitcher, allowing two runs, one unearned, over six innings. Hunter Dozier doubled for the lone KC extra-base hit. The Royals are 3-and-10 in their last 13.

Flaherty, in his last seven starts has given up just four runs along with 46 strikeouts in 45 1/3 innings.

(Philadelphia, PA) — J.T. Realmuto hit an RBI double in the seventh to break a two-all tie and push the Phillies to a 4-2 win over the Cubs at Citizens Bank Park. Realmuto also homered for Philadelphia, which sit two games behind the second NL wild card spot. Blake Parker picked up the win in relief of Jason Vargas. Hector Neris notched his 21st save. Nicholas Castellanos went yard in the sixth to tie the game for the Cubs, who saw their NL Central lead shrink to one game over St. Louis. Kyle Ryan took the loss for Chicago. Starter Jose Quintana struck out 14 in defeat.

(Milwaukee, WI) — Marwin Gonzalez clubbed a go-ahead, three-run homer in the eighth inning as the Twins topped the Brewers 7-5 in Milwaukee. Mitch Garver hit a two-run homer in a three-run third for Minnesota, which has won two-of-three. Tyler Duffey picked up the win and Sergio Romo notched his second save with the Twins and 19th overall. Christian Yelich doubled in a run and Yasmani Grandal hit a three-run homer during a four-run seventh inning that gave the Crew a brief 5-4 lead. Drew Pomeranz fell to 2-and-10 with the loss. >>Fried, Braves Shut Down Mets

(Cumberland, GA) — Max Fried picked up his 14th win of the year as the Braves beat the Mets 5-3 in Cobb County. Fried gave up just one run over six innings. Ronald Acuna Junior hit his 34th homer and Josh Donaldson, Matt Joyce, Freddie Freeman and Ender Inciarte each had run-scoring hits. Mark Melancon picked up his second save, his first with Atlanta, with a perfect ninth. The Braves have won three-of-four. Zack Wheeler fell to 9-and-7, giving up five runs on 12 hits in five innings. Juan Lagares was 4-for-4 with an RBI in the eighth in the loss, the Mets second-straight.