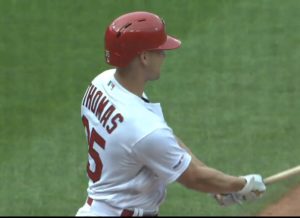 (St. Louis, MO) — Rookie Lane Thomas tripled, hit a grand slam, and drove in five as the Cardinals beat the Pirates 11-9 in St. Louis. Dexter Fowler and Paul Goldschmidt each hit two-run homers. Jon Gant moved to 8-and-0 with the win in relief as Andrew Miller picked up his fourth save. The Cards have won three-straight after sweeping the series. Josh Bell hit a pair of homers and drove in four while Adam Frazier had two hits and two RBI. Kyle Crick fell to 3-and-7 after giving up five runs on three hits in two-thirds of an inning. The Pirates have lost eight straight.

>>Cubs Rally To Down Reds

(Cincinnati, OH) — Kris Bryant belted a three-run homer in a four-run seventh as the Cubs rallied from a three-run deficit to defeat the Reds 6-3 in Cincinnati. Jason Heyward had two hits and scored two runs in the win, while Ian Happ hit a solo blast. Jon Lester allowed three runs over five innings in a no-decision as the Chicago won for the seventh time in 10 games. Eugenio Suarez pounded his 33rd home run as the Reds led 3-0 after five innings. Michael Lorenzen took the loss in relief. The Reds split the four-game series.

(Milwaukee, WI) — Mike Minor allowed four hits, walked one and struck out 11 over eight innings as the Rangers shut out the Brewers 1-0 in Milwaukee. José Leclerc
pitched a spotless ninth for his eighth save. Isiah Kiner-Falefa’s sacrifice fly scored Willie Calhoun in the seventh for the run. Texas snapped a four-game skid. Jordan Lyles allowed one run and three hits over seven innings, while striking out nine and walking four to take the loss. Ryan Braun had two of the four Milwaukee hits. The Brewers’ five-game winning streak was halted. 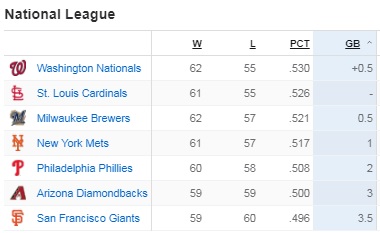 (Flushing, NY) — Asdrubal Cabrera’s two-run double in the in the seventh pushed the Nationals to a 7-to-4 win over the Mets in Queens. Victor Robles hit a two-run homer in the ninth to put the game out of reach. The Nats scored three runs in the first on a throwing error by Pete Alonso. Matt Grace picked up the win in relief of Anibal Sanchez. Sean Doolittle pitched a perfect ninth for his 26th save. Washington avoided the sweep and has won four-of-six. Joe Panik and Jeff McNeil each had run-scoring hits in the second to tie the game 3-3 for the Mets. Michael Conforto hit a sac fly in the seventh. Robert Gsellman took the loss, giving up two runs in a third of an inning in relief of Jacob deGrom. The loss snaps New York’s eight-game winning streak.

(San Francisco, CA) — Kevin Pillar tripled in the go-ahead run in a three-run eighth inning to lift the Giants to a 9-6 win over the Phillies in San Francisco. In his first ever plate appearance, reliever Will Smith drove in two on a single to add some insurance. Smith also got the win to improve to 4-and-0. Scooter Gennett and Mike Yastrzemski homered for the Giants, who took three-of-four in the series. Bryce Harper hit a two-run single and Cesar Hernandez had three hits and two RBI for Philadelphia, which wrapped up a 2-and-5 west coast road trip. Jose Alvarez took the loss in relief.