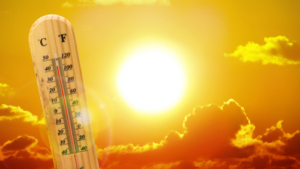 Folks in north County had upwards of over seven inches of rain, measured, in automated rain gauges up around Bellefontaine Neighbors and Glasgow Village,” Fuchs says.

“Just an incredible amount of water and quite a bit of flash flooding across north county,” says Fuchs.

Meantime, virtually all of Missouri remains under a heat advisory until 9 p.m. Monday. The heat index in Columbia and Jefferson City makes it feel like 107 degrees, and the heat index in southeast Missouri’s Poplar Bluff is about 110.

Fuchs tells Missourinet the heat has created a dangerous situation in which heat-related illnesses are possible.

“We’re looking at heat indices in parts of west-central Missouri, heat indices might exceed 110 degrees. And the same is true down in southeast Missouri,” Fuchs says.

You’re being urged to drink plenty of water and to avoid strenuous activity during the hottest part of the day.

Click here to listen to Brian Hauswirth’s full interview with NWS hydrologist Mark Fuchs, which was recorded on August 12, 2019: