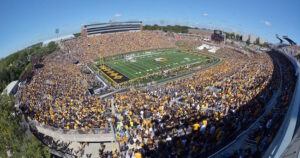 After getting positive feedback from fans, the University of Missouri Athletics Department will begin selling beer and wine in public areas at Memorial Stadium beginning this football season.  Mizzou joins a growing number of schools inside the “Power 5″ conferences who will sell alcohol.  More than half of the P5 institutions currently sell beer and wine at their football games and of the 129 FBS- playing schools, approximately 65 are set to sell alcoholic beverages this season.

“Since the SEC staff established its working group to study this issue in 2018, our staff has been working with campus leadership, including MU Chief of Police Doug Schwandt, and our Wellness Center team, to develop a detailed and thoughtful alcoholic beverage sales plan for Mizzou in the event that the SEC position on this issue were to change,” said Mizzou Director of Athletics Jim Sterk. “Based on the experiences of other institutions, we expect Mizzou football fans will appreciate this new option. We also expect alcoholic beverage sales at Memorial Stadium will help reduce the incidents associated with binge drinking that can occur on game day. We consider that a win-win for our fans.”

Beginning with the Tigers’ Sept. 7 home-opener against West Virginia, beer and wine will be available for purchase by fans 21 and over in several locations around Faurot Field. In accordance with SEC policy, the sale of alcoholic beverages at football games will end at the end of the third quarter and fans with a valid ID will only be able to purchase two drinks per transaction at select concession stands.

The university is ensuring fans of all ages that an enjoyable experience will be created for everyone.  Two feature Mizzou will include are a designated driving program and the establishment of an alcohol free zone in the stadium. The designated driving program will provide free fountain drinks and other giveaways to fans who sign in at guest service booths throughout the stadium to serve as a sober driver for the day. No alcohol will be sold in the alcohol free zone and tickets for that area will indicate that no alcohol will be sold in that area.

“Our plan is one that emphasizes control, monitoring, education and employee training which will make Mizzou Football enjoyable for all fans,” Sterk said. “Stadium personnel and law enforcement will monitor fan behavior, and if need be, we will adjust this policy as the season unfolds to provide the best possible game-day experience when cheering on the Tigers at Faurot Field.”