Missouri state troopers are urging motorists to be careful on the road, as students prepare to begin the 2019-2020 school year. 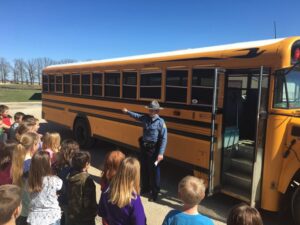 “And we want to make sure that anytime they’re (bus drivers) picking up or discharging students that people are stopping for them, if they’re required to stop,” Hotz says.

Captain Hotz reminds you that Missouri law requires drivers to stop when a school bus stops and displays warning signals to load or unload children, on a two-lane road.

He says pedestrian and bicycle traffic will increase near schools and wants drivers to be alert.

“We know that this time of year we’re going to start seeing school buses, we haven’t seen those for several months now,” says Hotz. “But we also see a lot of parents that take their kids to school.”

Hotz reminds children to wear a helmet and follow traffic laws, if they ride a bicycle to school.

He also says most traffic crashes involving drivers under the age of 21 happen between 3 and 4 p.m., when school typically lets out. As the new school year approaches, Hotz encourages parents to tell young people that driving is a full-time job.

He says using a cell phone or texting can be the distraction that leads to a crash, adding that texting while driving is against Missouri law for anyone under the age of 22.