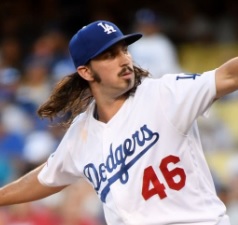 (Los Angeles, CA) — Tony Gonsolin fired six shutout innings as the Dodgers blanked the Cardinals 8-0 in Los Angeles. Gonsolin struck out seven for his first big league win, and the bullpen helped complete the two-hit shutout. Cody Bellinger launched a three-run homer in the first inning, and Joc Pederson also went deep for the Dodgers. They’re now 44-and-15 at home. Michael Wacha got chased in the fourth for the Cardinals to take the loss. St. Louis has lost three straight and six of its last eight games.

(Chicago, IL) — Javier Baez homered twice and drove in three runs in the Cubs’ 6-5 win over the Athletics at Wrigley Field. Nicholas Castellanos and Ian Happ belted solo shots for Chicago. Starter Kyle Hendricks worked into the seventh and allowed one hit and two runs in a no-decision. The Cubs have won four straight and lead the NL Central by 2 1/2 games over the Cardinals with a 61-and-51 record. Marcus Semien blasted two homers and drove in three Oakland runs. Nick Martin hit a two-run shot in defeat. The A’s are 6-and-2 in their last eight.

(Pittsburgh, PA) — Christian Yelich put a ball into the Allegheny River, serving as an exclamation mark on the Brewers’ 9-7 win over the Pirates in Pittsburgh. The homer was Yelich’s second of the game and Major League best 39th of the season. Trent Grisham picked up three RBI while Mike Moustakas hit a ball into the last row of the right-field bleachers. Jordan Lyles picked up his sixth win of the year. Milwaukee snapped a four-game losing streak. Bryan Reynolds stole Moustakas’ first bid for a homer in the second at the left field wall, and then homered in the fourth. Pablo Reyes hit a pinch-hit homer in the fifth and Kevin Newman hit a bases-clearing three-run double in the eighth. The Bucs have lost three straight.

(Boston, MA) — Rick Porcello held the Royals to one run and four hits over six innings as the Red Sox held on for a 7-5 win at Fenway. Sam Travis and Rafael Devers homered for Boston, which snapped an eight-game losing streak. Andrew Benintendi contributed a two-run double, while Brandon Workman closed it out for his sixth save. Bubba Starling belted a three-run homer in the eighth to pull Kansas City within two. Cheslor Cuthbert and Meibrys Viloria hit solo shots in defeat. The Royals have dropped seven straight.