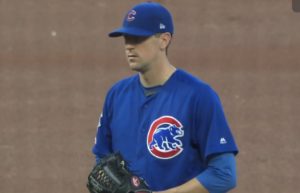 (St. Louis, MO) — Kyle Hendricks struck out seven over seven scoreless innings as the Cubs blanked the Cardinals 2-0 in St. Louis. Ian Happ singled in the first run in the sixth. Javy Baez scored an insurance run in the eighth for the Cubs on a throwing error. Craig Kimbrel notched his eighth save for Chicago, which has won two-of-three. Paul Goldschmidt and Kolten Wong each had two hits for St. Louis. Miles Mikolas allowed just an unearned run in five-and-two-thirds innings to take the tough-luck loss. The Cards have dropped three-of-four. The teams are now tied again atop the NL Central.

The Cardinals have lost 11-straight games in which Hendricks has started.

(Oakland, CA) — Jordan Lyles pitched well in his return to the Brewers as they nipped the A’s 4-2 in Oakland. Lyles tossed five frames of one-run ball to get the win after being acquired in a trade with Pittsburgh on Monday. Lorenzo Cain belted a leadoff homer in the first inning and Christian Yelich doubled in a run in the third as Milwaukee snapped a two-game slide. Brett Anderson gave up three runs in seven innings to take the loss. Jurickson Profar went 2-for-2 with an RBI double for Oakland, which had its three-game winning streak stopped.

(Washington, DC) — Josh Donaldson drilled a go-ahead solo homer in the top of the 10th inning as the Braves nipped the Nationals 5-4 in D.C. Adam Duvall also went deep, while Ozzie Albies and Tyler Flowers doubled in runs for Atlanta, which took two-of-three in the series. Sean Newcomb picked up the win and Josh Tomlin notched his first save. Juan Soto homered in the second inning and Matt Adams added a solo shot in the eighth for the Nats, who added two more runs in the ninth to tie it and force extras. Sean Doolittle suffered the loss.

>>Royals Get Swept By Jays

(Kansas City, MO) — Cam Gallagher homered in the third inning, but that it for the Royals’ offense in a 4-1 loss to the Blue Jays at Kauffman Stadium. The Royals managed only two more singles in the loss. Jakob Junis took the loss, yielding four runs in seven-plus innings. Kansas City was swept in the three-game series and lost six of seven on the homestand to fall 30 games below .500.