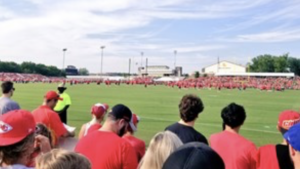 The opening day crowd of more than 8,000 fans broke an attendance record for a practice and was the second largest crowd ever recorded in the 10-year history of training camp at Missouri Western. Day two, on Sunday, July 28, brought the second largest crowd to see a practice with more than 7,000 fans in attendance. Chiefs fans from more than 30 states and seven countries went through the gates on the first two days of 2019 camp. The largest training camp crowd in St. Joseph topped 10,000 in 2010 for a practice held on Craig Field inside Spratt Memorial Stadium.

“Our goal is to make each year the best year of Training Camp, for both the team and the fans,” Missouri Western vice president of intercollegiate athletics Josh Looney said. “With the record crowds, positive energy and behind-the-scenes operations all meshing together, we can confidently say that this was the best opening weekend in the 10-year history of Chiefs Training Camp at Missouri Western. We look forward to welcoming more of Chiefs Kingdom to campus and carrying this opening weekend momentum through the remaining 13 practice dates.”