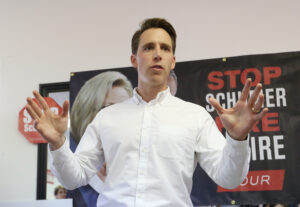 The legislation passed with unanimous Congressional support. It authorizes up to $7,500,000 in appropriations each year for fiscal years 2020 to 2024, which is the same level of authorization that the program had in 2000.

In a press release, Hawley, a Republican, says suicide is the number one cause of death for police officers nationwide. In 2018, 160 committed suicide, compared to 159 suicides in 2017 and 141 suicides in 2016. That is compared to 144 who died in the line of duty in 2018 from homicides, traffic accidents, and other causes.

“I’m thrilled that President Trump signed my bipartisan legislation to support the heroes of law enforcement into law. This legislation will save lives by providing critical aid to officers in crisis,” says Hawley.

According to Hawley, a former Missouri Attorney General, studies and surveys consistently show that law enforcement officers (“LEOs”) have above-average stress levels in their jobs.

Among the top stressor events that LEOs report facing on a regular basis are:

He says these differences in stress levels lead to greater adverse outcomes for LEOs than the general population.

• One study estimates that between 25% and 30% of police officers have stress-based physical health problems, most notably high blood pressure, coronary heart disease, and gastrointestinal disorders.
• Another study of Ohio police officers found that 7% of officers sampled met the criteria for post-traumatic stress disorder.
• The Centers for Disease Control concluded that the rate of suicides among workers in protective services (law enforcement and firefighting) is 40% higher than the national average.