(Cincinnati, OH) — Yairo Munoz homered, tripled, scored two runs and drove in two as the Cardinals beat the Reds 3-1 in Cincinnati. Giovanny Gallegos struck out four of the five batters he faced in relief to pick up the win. St. Louis won for the fourth time in five games. Anthony DeSclafani struck out a career-high 11 in six innings, allowing two runs, one unearned, but took the loss. Phillip Ervin hit a pinch homer in the eight as the Reds avoided a shutout. Cincinnati is 3-and-7 since the All-Star break to fall nine-game below .500.

(Cleveland, OH) — Francisco Lindor belted a two-run homer and the Indians held off the Royals for a 5-4 win in Cleveland. Jose Ramirez contributed a solo shot to the victory. Zach Plesac allowed two runs over six innings to pick up the victory. Cleveland won for the seventh time in eight games. Jorge Soler belted his 27th homer in defeat. Bubba Starling led off the ninth with his first big league homer as KC pulled within a run. Glenn Sparkman was the losing pitcher as the Royals dropped two-of-three in the series.

(Chicago, IL) — Fernando Tatis Junior drove in three runs as the Padres beat the Cubs 5-1 at Wrigley Field. He was 2-for-4 with run-scoring singles in the fifth and ninth. Cal Quantrill picked up his third win, giving up just two hits in five and two thirds of relief work. The Friars have won just two of their last nine games. Anthony Rizzo drove in the only Cubs run on a first-inning ground out. Kyle Hendricks fell to 7-and-8, despite giving up just two runs over seven. The loss snaps Chicago’s four-game winning streak. 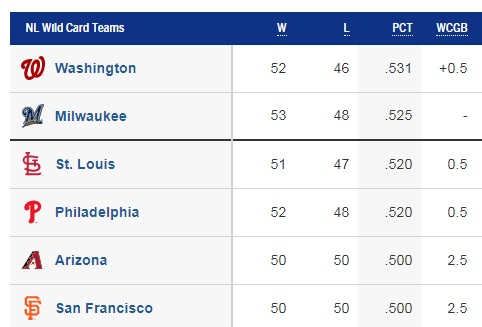 (Phoenix, AZ) — Mike Moustakas’ go-ahead, RBI-single ignited a three-run eighth inning as the Brewers rallied to beat the Diamondbacks 7-4 in Phoenix. Yasmani Grandal and Ben Gamel also plated runs in the eighth, while Tyler Saladino smacked a grand slam in the fourth for Milwaukee, which took three-of-four in the series. Freddy Peralta picked up the win and Josh Hader closed it out for his 22nd save. Brewers All-Star starting pitcher Brandon Woodruff left after three-plus innings with a strained left oblique and is headed for the 10-day injured list, according to manager Craig Counsell. Alex Avila hit a two-run homer for the Snakes, who led 4-0 after three innings. Yoan Lopez suffered the loss. The D’backs are 4-and-5 since the break.

(Atlanta, GA) — Josh Donaldson and Ronald Acuna Jr. homered to lead the Braves to a 7-1 victory over the Nationals in Atlanta. Kevin Gausman allowed on run in seven innings with eight strikeouts for Atlanta which has won two of its last three. Gerardo Parra brought in the only run for Washington in the loss. Joe Ross suffers the loss after giving up three runs in five-and-one-third innings for the Nationals who have lost three of their last five.

(Pittsburgh, PA) — Rhys Hoskins hit a solo homer in the 11th to lift the Phillies over the Pirates in Pittsburgh in extras. Cesar Hernandez had a run-scoring single in the fourth to put the Phils on the board. Drew Smyly made his first start for the club, going six innings and surrendering just one run while striking out eight. Philly has won three of four. Melky Cabrera drove in Josh Bell in the bottom of the first for the Pirates’ only run. Dario Agrazal gave up just one run over six, but didn’t factor in the decision. Chris Stratton took the loss. The Bucs have lost three of four and seven of nine.