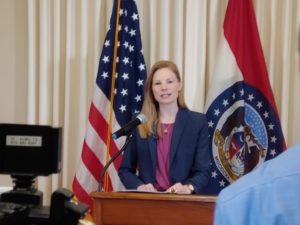 Galloway’s office has released a scathing district audit, which says Langner used to money to pay credit cards and for travel on Carnival Cruise Lines. The audit also says Langner used the money for entertainment at locations like Silver Dollar City, the Starlight Theatre and Space Center Houston.

Langner served as the district’s secretary/treasurer, and was fired by the board in October.

Galloway spokeswoman Steph Deidrick tells Missourinet that Langner has not been charged yet, adding that the FBI and the Missouri State Highway Patrol are investigating.

The auditor’s 46-page report notes the Clinton County prosecutor referred the matter to both the Highway Patrol and the FBI.

The state auditor’s public corruption and fraud division released the audit today, giving the district a rating of “poor.”

“This was a brazen betrayal by an official entrusted with public funds, who then tried to cover her tracks by falsifying documents,” Galloway says in a statement. “Restoring public trust and confidence in the district may be a challenge going forward, but it is vitally important that it happen.”

Galloway says a whistleblower contacted her office last fall, regarding potential fraud in the district. Galloway says that after a preliminary investigation found the allegations credible, she asked for and received a request from district officials to conduct an independent audit.

Plattsburg, which is in Clinton County, is southeast of St. Joseph.