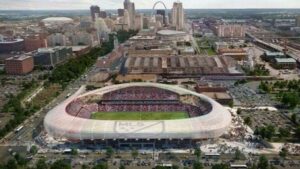 The ownership group vying to bring an MLS soccer team to St. Louis met with the MLS expansion committee on Monday at league headquarters in New York. The committee vets proposals before taking them to the league’s board of decision makers. MLS owners voted in April to expand the league to 30 teams. The league called the meeting productive and also met with boosters from Charlotte and will meet soon with a group from Sacramento.

With agreements currently in place with 27 total clubs, the league anticipates selecting the 28th and 29th expansion teams in the coming months with an expansion fee set at $200 million for both clubs. There are currently 24 clubs competing in the 2019 regular season in progress with expansion teams Inter Miami CF (2020), Nashville SC (2020) and Austin FC (2021) beginning play in the next two years, bringing the total of MLS clubs to 27.

Thank you @thesoccerdon and the @mls Expansion Committee for hosting our @MLS4theLou ownership group today! Hopefully we’ll be announcing a team for #STL the next time we get together! ???????????? pic.twitter.com/dlq1YHDcX9