(NASCAR)—Clint Bowyer’s race at Kentucky Speedway Saturday night wasn’t all what he hoped it would be but after an awful June, a sixth place at Kentucky was “a positive night.” Bowyer’s June showed finishes of 35-11-37-34, performances that dropped him from being solidly in the hunt for a playoff slot to teetering on the edge of dropping out of the top sixteen.  He’s now fourteenth, only ten points away from seventeenth. 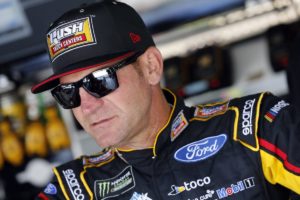 Bowyer started seventh and was in the lead on lap 166. Pit strategy and track position put him well back but he moved up as other drivers made late pit stops and was in the top five until the final restart. He came home sixth.

“It didn’t start out good, but we did a good job of working together, staying in it and not giving up…Our SHR cars are extremely fast; we show that in qualifying. But they aren’t the best in race trim and traffic yet. We have work to do there and we know that.”

Bowyer chose discretion over valor in the scramble after the last restart when the field had two laps to get whatever it could get.  “You hate to give up fifth right there at the line but we could have just as easily wrecked in turn one…and had another finish like we had in June.  We needed a good solid finish and we got that and got some good positive mojo back with our team and we will build on it,” he said after the race.

(INDYCAR)—The chase for the IndyCar championship tightened on the streets of Toronto, with Simon Pagenaud climbing into contention and defending series champion Scott Dixon overcoming an early incident to finish second.

But the greatest drive of the day might have been by someone not in the race.

Canadian Driver Robert Wickens, left paralyzed from the waist down by a massive crash last year at Pocono, returned to the track in a specially-equipped pace car and led the field to the start.

The race was all Pagenaud, as he led 80 of the 85 laps but had to work hard to stay ahead of Dixon, finishing just .137 seconds ahead. Dixon challenged for the lead although an early-race wall  encounter left him with suspension  damage  and a misaligned steering wheel.

The win is the third of the year for Pagenaud, whose biggest win was the Indianapolis 500.

Alexander Rossi was third, ahead of points leader Josef Newgarden. Newgarden now leads Rossi by only four points with six races left in the season. Pagenaud has risen to third, 39 points back.  Dixon trails by 86.

IndyCar also races at the Iowa Speedway next weekend. Its race is Saturday night.  NASCAR’s cup series race is on  Sunday.

(FORMULA 1)—One series that will NOT be running at Iowa next weekend is Formula 1.   Its next race is in two weeks, with the Grand Prix of Germany. This weekend’s race had a familiar look with Mercedes drivers Lewis Hamilton and Valterri  Bottas finishing 1-2 again.  Charles LeClerc, in a Ferrari, claimed the final podium spot.

The win is the seventh of the year for Hamilton. F1 has run ten races.